Those crazy cats at Community Board 2 got together again last night, so Eater operatives dropped by in hopes of overhearing First Word of planned venues around town. Herewith, the first of two reports today. 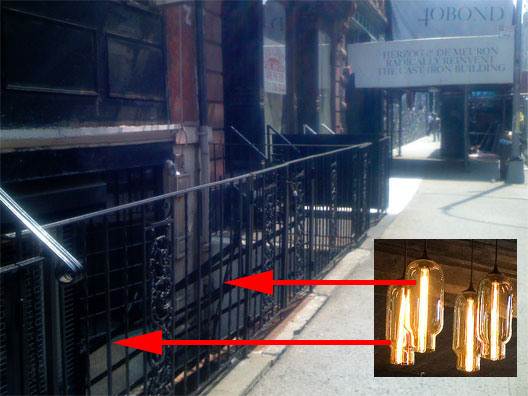 The AvroKo/Public team (which is to say, Brad and Adam Farmerie) are planning to open a new restaurant called Superior at 26-28 Bond Street. Nothing's known yet about the concept, but the situation's a bit dicey. At last night's community board meeting, Adam appeared to speak on behalf of the establishment and faced strong opposition from multiple community members; one board member noted that in 15 years, no one has ever been able to get the joint up to code and obtain a liquor license, and doubted they could succeed in doing so. B-Flat also applied for the same space but was rejected a few months back.

Our take? The subterranean space at 26-28 Bond is a gorgeous spot for a restaurant—a few steps down with big, bold windows looking out on what's overnight become one of the most interesting architectural blocks in Manhattan. And yeah, it's in disrepair. But despite the problems other AvroKO-related projects (like, ahem, E.U.) have had with liquor licenses and such, the vibe last night seemed to indicate that this one will be pushed through and approved—at which point Eater oddsmakers will set the opening date for spring 2008.
· Name That AvroKO Lightbulb [~E~]