Share All sharing options for: Eater Inside Posthumous: Charolais

A few lucky folks in the audience may have caught a glimpse of Charolais with their own eyes. Most, however, did not in the lightning-quick month the restaurant was open. She's now closed, and a study in how botched an opening can get. Simon Oren had planned an homage to the town in Burgundy, Charolais, but naming problems and an awful location quickly put the ghost town venue out of its misery. But, it's a nice enough interior -- an Oren signature, in fact -- and so we thought you might want to have a look. Above the Kalina master shot. Then, an alternate view of the dining room and some now-collectible press release language. 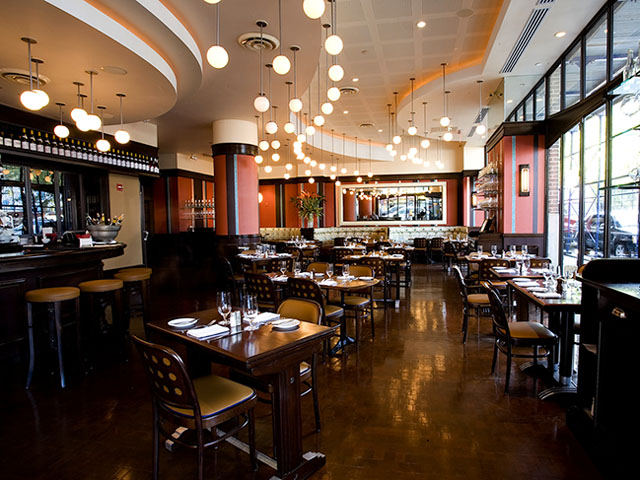 From a Charolais press release, now a collector's item:

"In the heart of Burgundy is a lovely town, Charolais, and the namesake of Simon Oren and chef-partner Philippe Roussel’s new addition to the Tour de France restaurant group (Marseille, Nice Matin, Café d’Alsace..)...Charolais, the restaurant, is a microcosm of all that is good and plentiful in all the many towns and villages connected by the canals of Burgundy, which join the Rivers Yonne and Saône, swolled with barges carrying foods, wines and other largess from the north to south of France. Burgundy has been inhabited in turn by Celts, Gauls, Romans, Germanic tribes; but most importantly the Burgundians and the Franks. And they all contributed to the rich heritage that is now the cuisine of Burgundy, known for its richness: snails, beef, hams, fish, produce, mushrooms, cheeses, herbs and wines, which also are used in the preparation of the rich Burgundy sauces...
The room is charming, sexy, warm and very downtown and seats 120. The ample bar is celebratory. The private dining room is filled with wines. The entire space is wrapped in 12 foot French doors, over 120 feet of them...
Welcome to Charolais?.

Further reading from the Eater Archives; and at Thrillist.