Plywood time, with lots from the Upper East Side this week. And away we go. 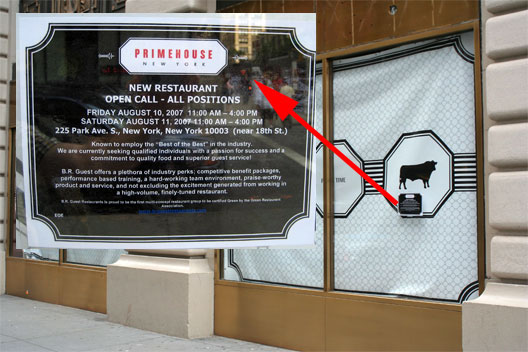 1) Park Avenue South: While on assignment in the neighborhood for Racked, photographer Will Femia snapped the above shots of Primehouse, BR Guest's forthcoming NYC edition of its David Burke partnership. [PLYWOOD]

2) Upper East Side: Emails a tipster, "Know anything about the new Enoteca on the UES? It's going up on 64th/3rd, in that cursed, bad karma space that was wild tuna and then I think mainland. They've made it look all faux-rustic and I think its got the name Enoteca del Academia or something like that. Paper on the windows, outside looks finished so I suppose an opening is imminent." [PLYWOOD/POST-PLYWOOD] 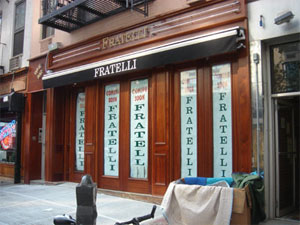 3) Upper East Side: Courtesy of blogger 78th and 2nd, we steal this glimpse at the rather aggressive sign'd Fratelli, coming to First Avenue between 70th and 71st. Also in progress: Bar Vespa , which will take the place of Oldies, Goldies and Moldies, at 1609 Second Avenue. [PLYWOOD x2]

4) Upper East Side: Emails another tipster, "Periyali uptown will be going into the retsina space (formerly ulrika's) on 60th st. there's also some serious plywood a few doors down (in the old pegasus space, which seems to have a garden), and a lot of basement being dug out from underneath the entire block." [PLYWOOD x2]

5) Williamsburg: A tipster emails, "The former Pourhouse on the corner of Humboldt and Metropolitan Ave. in Williamsburg, (under renovations since November) finally put up a new sign the other day and took down all the boards on the windows!
Its going to be called Legion, and it seems ready to go, although no one's seen the interior." [PLYWOOD/POST-PLYWOOD]