WILLIAMSBURG—Montgomery Knott, the brains behind performance space/restaurant Monkeytown, was arrested on Friday a day before he was supposed to cater Times deputy editor for online journalism Ariel Kaminer's wedding. As Knott told Gawker, it was "for a 'bench warrant that shouldn't have been a bench warrant.'" Of course, Knott's run-in with the law wreaked havoc on Kaminer's wedding, but Frank Bruni and Times art critic Michael Kimmelman saved the day by standing in as bartenders. [Gawker] 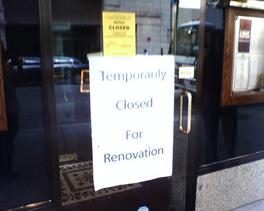 MIDTOWN—According to Midtown Lunch, Indian restaurant Bombay Palace on 52nd between Fifth and Sixth Aves was just shut down by the DOH with a whopping 127 violations. The restaurant then hung a sign in the door saying that they were "closed for renovations." [Midtown Lunch]

NOLITA—A reader writes, "Today I found the Italian Food Center, a popular place for sandwiches and Italian packaged foods, closed by the DOH. One of the DOH's yellow stickers was on the door. Don't know how long it's been there. Do you? Do you know why?" Ah, because they failed an inspection? That's our guess. [EaterWire Inbox]

UPPER WEST SIDE—Some very "shady" things are going on at Compass restaurant. According to a tipster, "I just found out that chef Fraiser (spelling ?) has not only left Compass restaurant, but, that the staff was told not too tell anyone !! so, very SHADY !! also, that his plans are to open up his own place, this fall on the uws." [EaterWire Inbox]