Recognize the logo accompanying this feature? Yes, it's MenuGate, Eater's ongoing investigation into the doings of the myriad online menu sites serving New York City. After a run last fall that began at Eleven Madison Park, traipsed to Lure, then spot-checked Gordon Ramsay, the MenuGate Inspectors have been dormant—too dormant. Today, they re-emerge in their eternal quest to determine which online menu sites live up to their lofty claims, and which fall down on the job. It's time for another round of MenuGate. Strap in. 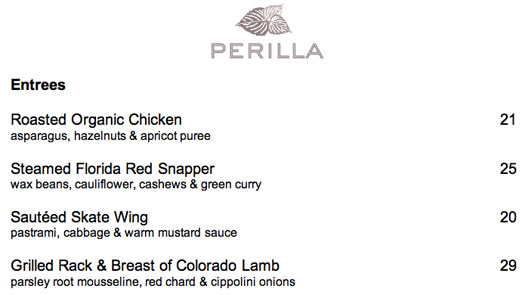 Today, MenuGate Inspectors have arrived at Perilla, Top Chef Harold Dieterle's West Village eatery that opened in early May. Dieterle's a fan of fresh ingredients, so naturally this is a restaurant whose menu will change several times a season. The fine folks at Perilla have been kind enough to provide us with the current menu, excerpted above, which debuted on Monday. Now it's time to take the menu players to test. Recall the rules of engagement: MenuGate Inspectors charge one point for every item listed on a menu that's no longer available at the restaurant—in our parlance, each Menu Violation.

Zagat, New York Magazine & Menutopia: Relative latecomers to the online menu game, these three sites all feature identical versions of the Perilla menu that, for the purposes of this little exercise, we're going to call Perilla v2. Which is to say that they're not showcasing the most recent menu changes—yes, friends, that Fiddlehead Fern Ravioli went out of season just as you might expect, and a Smoked Maui Onion Soup does sound a little too heavy for midsummer. But it was just Mondy that those changes went into effect, so let's cut a little slack. This version of the menu succeeds in showing prospective diners a solid snapshot of what they can expect to order at Perilla tonight, and for that, we salute them.
Menu Violations: a nicely respectable 6 (2.5 apps, 2.5 mains, 1 side)
Bonus: Both Menutopia and NYMag feature the Perilla dessert menu, too, which wasn't part of the inspection, but is worthy of note.

Menupages: The granddaddy of the game, and the clear winner of last fall's MenuGate inspections, lets us down at Perilla. From what we can tell, we're likely looking at the Perilla v1 menu here, which is to say the menu that Dieterle was serving on May 7 when he opened his doors. That means Menupages was likely, as they often are, the first to get the menu posted, but they've been remiss in updating. Broiled Atlantic eel? Taro-crusted Fluke? Long gone.
Menu Violations: an unsatisfactory 11 (5.5 apps, 3.5 mains, 2 sides)

Menupix: There is not much to say about MenuPix, the menu site that promises to show what menus look like in their actual fonts and layout, other than the fact that they don't have any Perilla menu of any vintage. On the bright side, they do offer to map the (0) results for Perilla. Thanks for that!
Menu Violations: the clear loser with a max score of 21