At long last, Centro, Sasha Muniak and Anne Burrell's new Italian on Seventh Avenue South, is readying for its grand opening. Just yesterday upgraded to post-plywood (photos courtesy of a West Village field agent), the plan at present is to hold friends & family tastings beginning on Friday the 13th and to debut for the public on Monday the 16th. While the official word from Centro PR is still a useless "soon", here's a note we received from the inside, with the appropriate shill disclosures responsibly noted at top:

Hey guys, I’m a really good friend of Anne Burrell’s and while I haven’t been able to snap some post-scaffolding removal plywood picks for you I can tell you that Anne and the whole staff is working very hard to get the place ready for Friends and Family which starts Friday night July 13th (13 is a lucky number in Italy). Centro officially opens on Monday July 16th. They have passed their DOH inspection with flying colors and all signs point to GO for Friday. 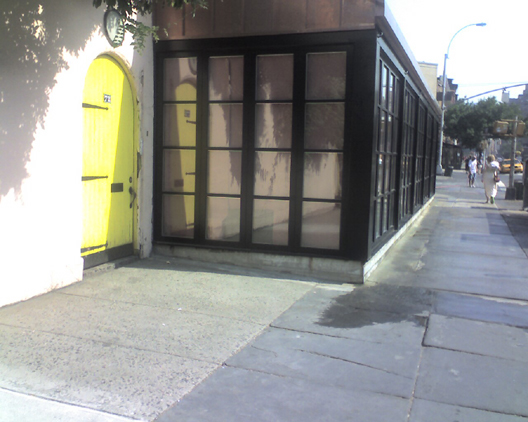 There have been holdups as reported, including the last major holdup which was that ConED transformer that had to be removed from halfway underneath the sidewalk and their dining room. Quite a pain, but apparently there was a similar transformer that blew up across the street near Sushi Samba, so it’s a good thing they got it removed before Centro opens.

Having tasted quite a lot of Anne’s cooking over the past few years, I can say that I am PUMPED about this opening because she is supremely talented. I’m not just saying that because I’m a friend, but I really love her dishes.

And just in case you that take is a little too flowery for you, this is the other Centro note that arrived yesterday: "The scaffolding is finally down and it looks like CENTRO, a new Italian eatery at Bleecker and 7th Av South might finally open. By the looks of the awning...it might befall the fate of typical 7th avenue restaurants: awful." Good or bad, the Morandi-Centro, McNally-Muniak battle of the burrata is now less than a week out.
· Plywood: Centro Vinoteca [~E~]