The Shutter reports on restaurant and bar closings around town. Be very afraid. 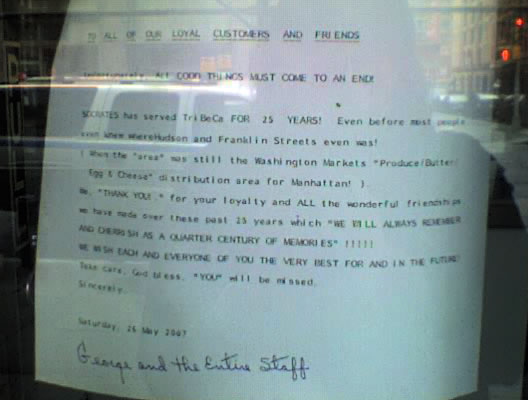 [Sign at the shuttered Socrates in Tribeca. Photo by jukeboxgraduate/Eater Photo Pool]

1) Tribeca: We're late to this, but so be it: Greek diner Socrates unexpectedly shut its doors over Memorial Day weekend. Downtown Express runs a solid retrospective piece on the longtime neighborhood staple. Godspeed. [Downtown Express]

2) Chelsea: An Eater reader reports on the loss of another nabe fave: "The Cuban Sandwich Shop in Chelsea on 8th Ave is closed. A longtime staple of cheap, good Cuban food in a nice, shabby but fun atmosphere, including placemats with a map of Cuba on them. I went by there today and the entire restaurant had all of its furniture, counters and equipment removed with bags of garbage piled out front. Sad to see Chelsea lose this." [Shutter Inbox]

3) Upper East Side: A tipster reports on twin East 70s carnage: "Mary Ann's Chula Vista, located on 78th and 2nd Ave., is closed. The Cocktail Room, located on 73rd between 1st and 2nd, appears to be closed." Calls to both numbers were met with the dread "number not in service." Though The Cocktail Room on the fade for awhile, it's still a loss for the area. As for Mary Ann's, we'll leave you to judge its loss for yourself. Sayonara. [Shutter Inbox]

4) East Village: Andrew Gottlieb has the scoop on an East Village old-timer calling it quits: "Teresa's, the the Polish stalwart on lower on First Avenue, has ended its 22 year run in the East Village. They remain in business at a Brooklyn Heights location." [Gothamist]