The food world has been absolutely transfixed by Rebecca Charles's decision to sue her former apprentice cum right-hand man Ed MacFarland for stealing her Pearl Oyster concept and cloning it into Ed's Lobster Bar (via press conference, Ed maintained his innocence, of course). It's being billed as the first of its kind in the restaurant world, an intellectual property lawsuit that gets to the essential and tumultuous question of how much of a restaurant's DNA said restaurant can really own—and, also, how original a concept is a fish shack in New York. On the issue of whether Ed's is, in fact, a knockoff, it probably is. Aesthetically, they differ (above, Pearl; below, Ed's), but the menu similarities (Pearl, Ed's) are striking.

For our part, we'll say that if Rebecca Charles was so worried about people knocking off her restaurant, she should have opened one on the East Side, with MacFarland at the helm, two years ago. Cut the issue off at the pass by spreading the wealth. She'd certainly have turned a profit on a theoretical Pearl East by now and would not be burning her cash on legal fees. The rest of the dispute is up for debate. Here now, what some of the web heavies have had to say thus far:

1) Ed Levine (earlier this month): "Now I understand that a Maine lobster shack menu and concept is not anything that can be copyrighted or patented. There are probably a hundred of them in Maine, and they've been around a long time, at least in Maine. But Pearl Oyster Bar is a New York City lobster shack opened by a highly trained chef who took that style of food and made it her own, armed with cooking technique and some original ideas...Pearl became its own unique animal, something that is in fact quite different from the lobster shacks of Maine."

And this morning "This fight is not about serious eaters enjoying unfettered access to delectable lobster rolls and Caesar salads. It's about a violation of trust, resentment, and betrayal behind the counter and the stove at a couple of restaurants in New York." 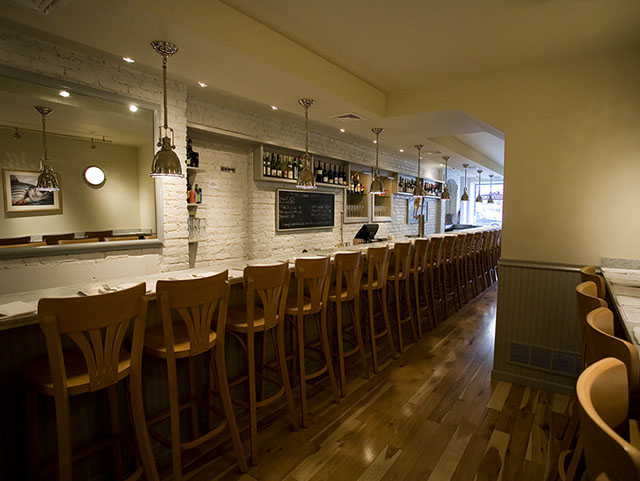 2) Megnut: "One one hand, I can see how she's frustrated after pouring so much into her restaurant and watching her former employees go open similar places. But filing a lawsuit seems ridiculous to me. I'm no fan of copyrighting recipes (see Keep recipes free) and I'm not much in favor of intellectual property claims on restaurant themes either. Lobster rolls? "Packets of oyster crackers placed at each table setting?" A "white marble bar" for seafood? Have you ever been to New England or France? Rebecca Charles hardly invented these concepts ten years ago. Instead, she was free to incorporate them in her new place because they've existed for so long and been used by so many; because they haven't been copyrighted and trademarked by lawyers and corporations. These details are the essence of our seafood restaurant vernacular, that's why they resonate with so many potential customers and give her West Village restaurant an authenticity she's now trying to control. Mr. McFarland would be hard-pressed to open an authentic-seeming lobster bar without including at least some similar items."

3) Erik Sherman: The paint scheme evocative of summers in Maine? She may see that as a personal statement, but so could hundreds of thousands, if not millions, of others who have spent enough time in Maine. The Caesar salad? Got the recipe from her mother who got it from an LA restaurant years ago, except now she calls it a trade secret. But whose? Coddled eggs as a basis for the dressing? I remember hearing that concept probably a dozen years ago on a cooking show where the chefs said that it was a way to prevent problems with salmonella from raw eggs...I understand the desire to protect intellectual property. I do that myself, as my living is based on IP. But you need to know when you've really done something different and when you owe too much to everyone who has gone before."

4) Jason Kottke: "The key question in these kinds of cases for me is: does the person exercise creativity in the appropriation? Did they add something to it instead of just copying or superficially changing it? Clam shacks are everywhere in New England, but an upscale seafood establishment with a premium lobster roll is a unique creative twist on that concept brought to NYC by Charles. An upscale clam shack blocks away from a nearly identical restaurant at which the owner used to work for six years...that seems a bit lame to me, not the work of a creative restaurateur."

5) Gurgling Cod: "If Charles wins, it opens up a whole can of worms -- no more mullet for the singer in Quarterflash, no more bowl cuts for the Monkees. From here, it looks like a case of bitch stole my look, which I do not think is illegal. Yet."

Photos from the Kalina Archive