Like a nor'easter sweeping in from the, uh, east, this past weekend left a trail of destruction across the restaurant industry. Herewith, another installment of The Shutter. 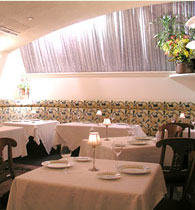 1) East 50s: "Nish closed on Saturday night," a special Eater correspondent emails. Sure thing—and credit Cutlets with the scoop on this one. Details of the why and how of the shuttering, which comes just a few months after the redone space earned a two-spot from Frank Bruni—are vague but this much is certain: in the wake of the Varietal wipeout just a few weeks back, this isn't the best of months for Mr. Wayne Nish. [Shutter Inbox/Cutlets]

2) Upper East Side: The closing of neighborhood coffee shop DTUT, first reported by Eater, came to its inevitable close this weekend. An email in our inbox from yesterday: "Today is DTUT's last day. The unofficial party starts sometime after 8pm, with drinking & free food past 9pm. I'll try to stop by, for its the first time that I've known a coffee lounge to have a party for closing." Let it be known, the natives are restless. [Shutter Inbox]

3) Park Avenue South: A tipster emails, "After 20 years in its Park Ave South location across the street from Les Halles and next door to the relatively new [albeit also now-deceased] Pinch Pizza, Park Bistro served its last meal there this past Saturday, June 23rd. Chef/owner Richard Galcik told me the building is coming down to make way for a condo. (So, what's new?!) Luckily, he has already leased space two blocks south, b/t 26th & 27th St., same block as Dos Caminos. Interior work is already in progress. If things go according to plan, Park Bistro will re-open in its new digs on July 7th." [Shutterwood Inbox]