EaterWire: DOH Reports From All Over Town & More!

Share All sharing options for: EaterWire: DOH Reports From All Over Town & More! 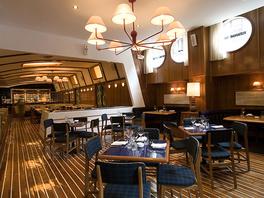 SOHO—Every eatery around town is rolling out Mother's Day menus (for those not in possession of a calender, you must purchase a gift for your Mom by May 13th) but Lure is taking things a step further. They're launching brunch service (cocktails and the like) starting on Mother's Day. Unrelated but also worth noting: a filet-o-fish knock-off sandwich is in the works. [Eater Staff]

FINANCIAL DISTRICT—A reader who's really, really jonesing for some shawarma or something notes restaurant Alfanoose's mysterious closure. "Took a walk over to my favorite middle eastern place in the downtown area, Alfanoose (8 Maiden Lane), today and found the gates down, this at about 12:30 - prime lunch hour, and was aghast. Could they have been DOH'd or worse? Any word on why they would be closed or shut?" Then, this morning, the selfsame reader has an update, "'We are closed for renovations. We expect to be open Wednesday May 2nd.' (I guess their renovations are running late.)" [EaterWire Inbox]

CENTRAL VILLAGE—Pio Maya, the petite taquería that had people raving about its juicy spit-roasted chicken, is currently closed. Culprit: the DOH. Amongst the many violations, the fact that the person supervising "food operations" didn't have a Food Protection Certificate seems pretty suspect. [Central Village]

CENTRAL VILLAGE—The legendary Cedar Tavern, reported shuttered a few months back, has now been totally gutted. The building's owner plans on adding condos above the bar. The tavern is supposed to reopen in somewhat the same shape that it was closed, though from this pic, that's hard to imagine. [WhatISee]