Share All sharing options for: EaterWire: Parea Gets A New Chef & More!

Side note: before we dive into 'Wire, let's all wish West Village eatery Little Owl, which celebrated its first anniversary this weekend, a happy birthday. 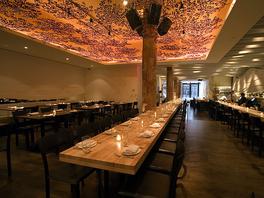 PARK AVE SOUTH—It appears as if executive chef Jonathon Sawyer has left Parea, as we get news via a tipster that the restaurant's owner has appointed a new head toque. "Micheal Symon's modern Greek restaurant Parea on 20 th St. just got a new Chef, His name is Brian Goodman He use to be a Chef for Charlie Palmer and I think did some time at Union Square Cafe." The good news, "Then [sic] menu hasn't changed much from the last time I had dined at Parea, but I had a great meal." [EaterWire Inbox]

MIDTOWN WEST—The Time Hotel space that housed 7Square, the blink-and-you'd-miss-it "modern chophouse," will soon reopen as another outpost of mini-chain Serafina. From a tipster, "serafina to open in the time hotel in 2 weeks in the former 7 square space..." [EaterWire Inbox]

RED HOOK—Two Red Hook tidbits: 360 is currently closed for repairs and a bar is set to open this summer in the space that housed Lillie's. [Amy Langfield's New York Notebook]

UPPER WEST SIDE—Big Nick's, the 24-hour UWS diner, has reopened two weeks after being closed down by the DOH. [What I See]