Our all-day Plymania blowout continues. Now to the Lower East Side, judged by some to be the ür-plywood neighborhood. (We're inclined to agree.) 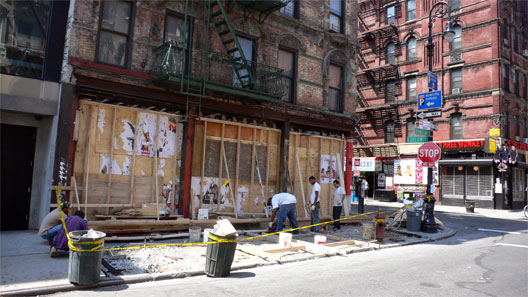 1) Ludlow/Rivington: The departure of Sam Talbot from the project hasn't halted progress at Spitzer's, which tore down its old plywood then tore up the sidewalk this week. Still a ways to go on the interior, though—gotta step it up if they're serious about hitting that mid-June open. [PLYWOOD]

2) Essex/Canal: Honestly, this insane bit of intel is too much for us to drop on the front page without a full-fledged spoiler alert. 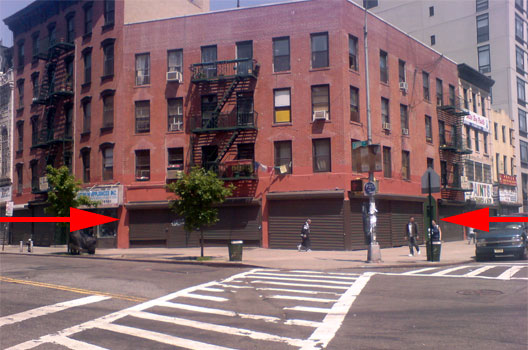 Above, the northwest corner of Essex and Canal, in the BelDel. It's been shuttered forever, this 150 feet or so of storefront, and part of the facade faces the brick towers of co-op city, which doesn't make for the best of vistas. And yet, with a little imagination, one can almost picture a bustling Parisian bistro on the corner, overflowing onto the sidewalk...

As can, apparently, yes, oh yes, Keith McNally. Insiders whisper that McNally is casing the joint for a new restaurant. Emails to The Man went unreturned, and there's every chance that if this rumor happened to have a hint of truth about it, that Keith has already canceled plans just to thwart the rumormongers. But there it is. [PRE-PRE-PLYWOOD]
UPDATE: Per an email, McNally says there's no truth to this rumor.