We have too much Dish for one post, so we're breaking it into courses. Here, the appetizers; entrées to follow. 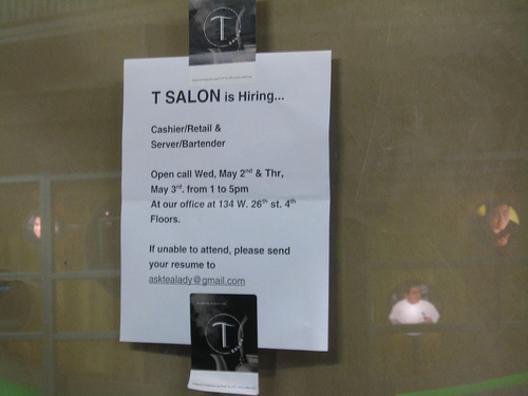 1) T Salon: New to the Chelsea Market is T Salon (see above, a photo from a few weeks back when the joint was still papered up). It's the second incarnation of the place, which specializes in—what else—tea, and had previously been located in the Chelsea Arts Building on 26th Street. Owner Miriam Novalle offers sippers over 200 varieties of loose leaf teas as well as afternoon tea services for private parties. (Chelsea Market, 459 W 15th St between Ninth and Tenth Aves; (212) 243-2259). [Eater Inbox]

2) East Village Yacht Club: Sailing-inspired restaurant and bar East Village Yacht Club comes to us courtesy of Andy King (an event planner) and Nicola Kotsoni, formerly of Il Cantinori, Periyali and Bar Six. The bi-level space has a raw bar area, a "grill room" with TVs broadcasting sports, a dining room and a lounge with couches and backgammon tables. The menu here seems country club-inspired, with dishes like chicken a la king, while finger food-style apps, such as pigs-the-blanket and mini-burgers, are a bit more sportsbarish. Judging from the concept and the menu, expect lots of dudes with popped collars who'd rather be in the Hamptons. (42 East First St at Second Ave; (212) 777-5617). [Eater Inbox]

3) Bodeguita Cubana: The East Village already has a few casual Cuban cafes—Cafecito, Cafe Fuego—but we're sure there's room for another. The petite Bodeguita Cubana offers Cuban sandwiches, of course, as well as other dishes such as pollo a la plancha, ropa vieja and a few types of "Cuban pizza." Perhaps most alluringly, there's a full brunch menu with offerings like huevos con chorizo and olive-oil-fried eggs. (271 E 10th St between First Ave and Ave A; (212) 533-5600). [NY Mag]

4) Aloe: From a reader, we receive a shill about this recently-opened East Village spot, "There's a wonderful new restaurant that just opened in the east village called aloe. I had the pleasure of tasting small portions of many of the dishes on the menu last weekend and I was pleasantly surprised. It's located on E. 9th st. between 1st ave, and ave A. The head chef's name is Amit kale. Please check it out." No mention of what type of food they're offering or what the atmosphere is like, but hey, we're sure it's all just "wonderful." (406 E 9th St between First Ave and Ave A; (212) 358-8400). [Eater Inbox]

6) Le Baricou: From a tipster, news of a a bistro in Billyburg, "at 533 grand street [between union and lorimer] a new restaurant is opening tonight - as the sign in front says. it is called "le barricou" and there is a menu taped to the sign. it says the owner/chef is joab masse. didn't have my camera, but maybe someone else will send some pictures. menu looks basic, trying for the american/french bistro with a red and yellow-ish color scheme at the facade. just thought you should know." (533 Grand St between Union Ave and Lorimer St, Williamsburg, Brooklyn; (718) 782-7372). [Eater Inbox]