1) Robert Sietsema may have sideshow dining as his beat, but when he does veer into the mainstream, we're listening. This week, he sends shockwaves through the pizza set, putting the classic best-pie debate back in play (Una Pizza Napoletana, generally speaking, had held the title with heavies like Ed Levine in its corner). Sietsema's nomination is Il Brigante, a somewhat new joint on Front Street:

At its heart, Il Brigante is a pizzeria, and a damn good one. The rear wall is dominated by a flickering wood-burning hearth inside a limestone proscenium, where a sweating and grunting pizzaiolo is the star of his own small repertory theater. In the style of southern Italy, the 10-inch pies are intended for individual consumption. In fact, the margherita ($10) is the city's most perfect evocation of the true Naples style (even surpassing top spots like Una Pizza Napoletana and La Pizza Fresca). Starting with an irregular round of glove-soft dough with no yeasty taste, the margherita is dampened with plain tomato sauce and excellent cheese, bravely wearing a pair of fragrant basil leaves on its bosom. Eat it with a knife and fork—this is no New York pie.

You have about a 90-minute window before the place is packed for the next two years. [VV] 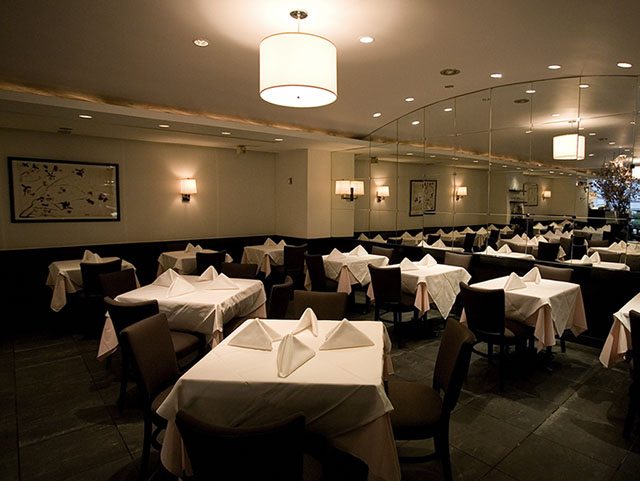 2) Next up, the Bada Bing, Bada Bruni is at Anthos, where he drops off two stars for Donatela Arpaia and Michael Psilakis. It could have been a three bagger if the critic hadn't fallen asleep mid-meal:

...the ratio of hits to misses is better at Anthos than at Dona, where the menu’s sprawl worked against it. If the setting were cheerier and the kitchen’s efforts just a little more selective and straightforward, Mr. Psilakis and Ms. Arpaia would have a restaurant that represented not just the blossom but the full flower of his dream. The quest continues, or at least I hope it does.

Said quest, of course, is Arpaia's for a three star restaurant. With three consecutive two-baggers under her belt, the wait for a three-star effort is becoming a bit conspicuous. [NYT]

3) And, finally, we come to Mr. Platt. He's got a two-fer coming at you, with two and one star verdicts for 15 East and "Rosanjin, respectively. No big shockers here, though the two stars for 15 East -- on his five-star scale, less than half-good -- feels a bit low. Shall we adjourn to the quotage and see what happened?

Last time I checked, there were only five entrées available at 15 East. They included a wet, unsurprising assemblage of salmon served five different ways, tasty (and, at $32, pricey) rounds of consommé-drenched lobster encased in a miso crust, and duck breasts smoked, not unpleasantly, in hojicha tea. If you wish to fork out $45, slices of broiled Kobe beef are available, too, with a little pot of shiitake butter for dipping. But in the end, the dish of choice at this unassuming little restaurant is the first-class sushi.

Only two stars for 'first class sushi? Perhaps the Platt is taking himself a bit seriously this week. You decide, after the click. [NYM]

And on the blogs, Nosh at Cafe Cluny, the RG's 'transcendent tryst' at Soto, the Gaijin Girl inside Whole Foods Bowery at Sushi-ya, Big Apple Dining Guide going to give it a second shot at Amalia and Scoboco at P.ong.