Share All sharing options for: Adventures in PR: Steal Your Camera Edition

The strange saga of the Flatiron newcomer that taunted us all winter with its window signage (right)—a newcomer later revealed to carry the moniker Bar Stuzzichini—is finding new ways to win friends in the neighborhood. A tipster emails,

Friday afternoon the doors to (a still very much under construction) Bar Stuzzichini were thrown open to the world, probably because of the heat. I took a photo on my cell and continued on my way.

A block down I heard someone screaming behind me, and turned to find about 50 people on Broadway staring at this guy who had run out of the restaurant. Definitely not a one of the construction laborers, he demanded to know who I was and why I was taking photos of his place. I explained that the open doors made it fair game to the public. He didn't share this view, and kept asking for my phone, making various excuses as to why I couldn't photograph his unfinished bar/restaurant, and finally threatening to call the police. When I didn't bite, he threatened that if I ever took another photo of his place he would take my camera from me. It was amusing.

The photo is attached. 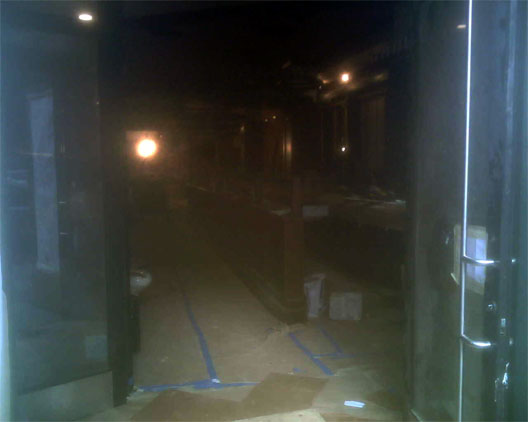