CENTRAL VILLAGE—This just in on the 'Wire: Jason Denton is no longer a partner in Italian restaurant Otto, having just sold his stake in the eatery. According to a reliable source, "he's buying a building." The news has been confirmed by Mario Batali. Denton will remain the fearless leader at Lupa, as well as of own empire ('ino, 'inoteca). [EaterWire]

MIDTOWN WEST—Bar/restaurant Sortie has just launched brunch. It's an interesting concept—for the bargain price of $18, you can enjoy crêpes, booze and European house music. [EaterWire]

BOREUM HILL—On a glorious, sunny day such as this, our thoughts turn to al fresco drinking and dining. Good to know, then, that plywood vet Donna da Vine, a wine bar located at 378 Atlantic Avenue, has opened their backyard (pictured below) for the season. [EaterWire Inbox] 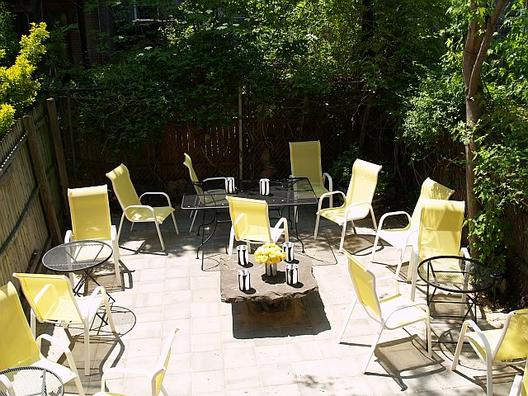 CENTRAL VILLAGE—It's the end of the world as we know it for University Place—at least according to one local resident, who's worried about a possible preponderance of sidewalk cafes.

Cafe Jack at 80 University Place wanted a sidewalk cafe license and came up against -heavy- community opposition. Even though Julie Weprin has lived in The Village her whole life and runs a very nice place-- low key, cost a fortune to build, mature crowd. I live on that block. See background here. What the Village antis didn't count on is that Julie's family is lawyers and elected officials. They challenged the community board and Council's knee-jerk reaction in court-- and handily kicked the living crap out of the opposition. NOW, thanks to the intransigence and capriciousness of the the local antis, University Place will be open range for sidewalk cafes. Which, I personally, as a property owner on University Place, am not really in favor of. The court essentially laughed at the grounds on which the application was rejected-- and rightly so. They should have judged Weprin's Cafe Jack on the merits.. now, they blew any chance of having a say in what will undoubtedly be a flood of new applications on University Place.