This afternoon, there will be Plywood. In copious, perhaps even promiscuous, quantities. Let's bring some serious heat to start, shall we?

1) East Village: Above, note the progress since the last Plywood check-in on the interior of Gemma, the Italian restaurant prepping to open in the Bowery Hotel. Word is that the place is about a month out, with the wait at this point primarily furniture-related. Interior design, should you have forgotten, is by Mr. Taavo Somer. [PLYWOOD]

2) West Village: A tipster emails regarding the forthcoming Mikey Price eatery: "They have begun doing some excavation work today on the space that used to be Shopsin's. They're moving out booths and stuff, and creating a large pile of trash on the corner. I asked one of the workers what was planned for the space and he said it would be a restaurant/market. Though I'm still mourning the loss of the city's best breakfast joint, I'm relieved to find out I won't be living across the street from a new bank or a Starbucks." [PRE-PLYWOOD] 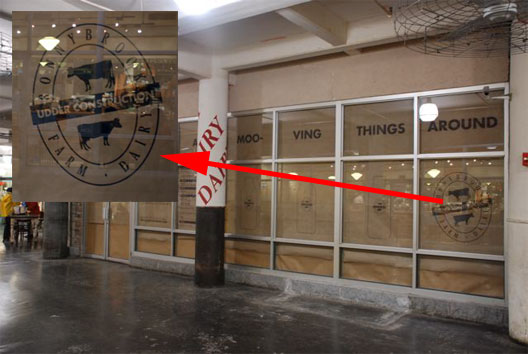 3) NoMeat: "Chelsea Market's Ronnybrook just started putting up some brown paper (not plywood per se but something like it). They are preparing for a gut renovation and a re-opening/re-envisioning as Ronnybrook Milk Bar, a take-away (and bar seating) breaky and lunch spot, with an emphasis on dairy products (obviously). So think granola and yogurt for breakfast, sammys with cheese and other accoutrements for lunch. Baked goods and milkshakes, too. [And eggnog?--Ed.] Studio a+i, a brooklyn-based team with ties to Raphael Viñoly, and the store's owner, a former David Rockwell employee, are designing." [PLYWOOD]