Dish on a Monday, you say? Crazier thoughts are few and far between, yet we proceed. With caution. 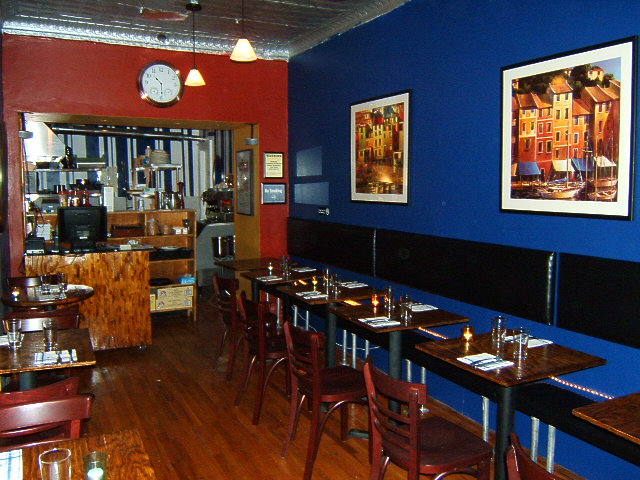 1) La Sirene: In a stroke of urban economical genius, this 19-seater has opened three storefronts down from the constantly packed Ivo and Lulu. It will do fine on overflow alone, but turns out chef/owner Didier Pawlicki is doing some PR, too. His note to us: "Hi everybody. My name is Didier Pawlicki (chef owner) and I opened Monday this new small French bistro B.Y.O.B (19 seats only) located in New York. Entrees priced under $20.00 J prixfix menu 3 courses @ $19.95...The name is LA SIRENE and we do serve skate fish , mussels, Sardines,Shrimps, Tilapia but also some chicken fricassee and roasted Lamb au Jus?I would be glad to hear from you?" NB, cash only. 558 Broome Street, West Soho; (212) 925-3060. [Eater Staff]

2) Estancia 460: More name change than debut, the Tribeca restaurant that was Sosa Borella is now Estancia 460. Turns out Mr. and Mrs. Sosa split, leaving the downtown location in the capable and charming hands of one Stacey Sosa. She's made some small changes to the interior, redone some of the art work, replaced the bar lighting fixtures, but kept the Argentinian bistro menu intact. Best of all, she remains a constant presence in the dining room. And, as a special bonus, she's launched Estancia 460, a blog and website based in the restaurant. Do be sure to ask her about her daughter's movie project. 460 Greenwich Street, Tribeca; (212) 431-5093. [Estancia 460; Eater Staff]

3) Soto: Sotohiro Kosugi's Soto, is open for friends and family this week and will open to the public next. Kosugi's West Village sushi restaurant is his New York debut and his long-awaited return to sushi-making, the chef having earned a huge following and "Best New Chef" stripes in Atlanta. The Plywood alum absolutely will become the rage among the sushi set, so you might want to work your way in this week. The Robs have a bit more, but note they've jumped the gun on the announcement by a week. 357 Sixth Avenue, West Village; (212) 414-3088. [NYM; Eater Staff]