MIDTOWN EAST—English Is Italian is now Wild Salmon. Reports a reader, "English is Italian is finally gone...Closed two weeks ago. Confirmed it by calling their number. No surprise as it has been known that Chodorow is opening Wild Salmon in its place this friday (this also confirmed by calling the restaurant's old phone number)." Indeed, the place is already up on Open Table. [EaterWire Inbox] 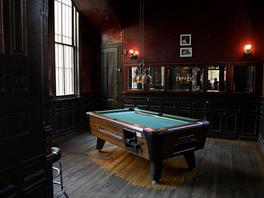 BOERUM HILL—We're afraid it might be curtains for venerable drinking establishment Brooklyn Inn. A reader sends this alarming note, "i just heard (from a good friend) that the brooklyn inn is closing and the space being turned into a bistro. how has this info flown under the radar?" [EaterWire Inbox]

MIDTOWN EAST—Looks like that tip about the firing of Gilt's pastry chef Nick Morganstern was correct. Today, we received a press release alerting us to his replacement, David Carmichael, who's put in time at Daniel, Le Bernardin, Lutece, and Oceana. [EaterWire Inbox]

WEST VILLAGE—Brace yourself for a wealth of goings on in the West Village, as a tipster has word of not one but four rumored restaurant shifts. "Not sure if this has been reported yet, but here's some restaurant news from the lower West Village. There's apparently about to be a lot of action on the blocks of Hudson b/w Leroy and Barrow. The mediocre and over-priced take-out place Out of the Kitchen (456 Hudson) has posted a sign saying they're moving in a few months down the street to 420 Hudson (former home of Chick Inn and the instant failure that was Setacci), they may also be taking over the old Candy Café spot next door--no word on that, but that space has been papered over for months and there's definitely construction going on inside. I also have it on good authority that Alexandra (455 Hudson) has a lock on the soon-to-be-former Out of the Kitchen space, and they've also apparently made a huge blind offer on the space just next door to it, which currently is a watch and shoe repair store. They're planning to combine the spaces and open a wine bar (meant to be a waiting area for their customers). Seems like they're trying to do a Blue Ribbon type thing, but it is quite puzzling as there never seems to be a line out the door (or even a full house) at Alexandra." [EaterWire Inbox]