1) West Village: Shall we say, BREAKING? "The papered storefront has finally come down at the former Ony Noodles at 374 6th Avenue. Workers were busy this morning installing a strategically hidden door bell. Chef Sotohiro Kosugi must not want the hoards of people on 6th Ave peering into his space so he covered the storefront with a geometrical wall that prohibits the street traffic from staring into the space while you are dining." Yes, friends, the arrival of the Great Sotohiro Kosugi is nearly upon us. Brace. [Plywood Inbox, previous coverage]

2) West Village: Wherelse but the PXThis message board to score an update on Gusto owner Sasha Muniak's new Italian, Centro Vinoteca, at 74 Seventh Ave., featuring Anne Burrell in the kitchen. Sayeth The Diaz, "yes it's anne-burrell. and according to what i hear about tastings, she is seriously kicking ass... the 'holdup' was first Landmarks ?? then design ?? (by thomas-juul.hansen) then something about some old ConEdison converter that needed removing. again, not EXACTLY sure. yes it will have an outdoor sidewalk cafe thingie too. maybe it's another month or some shit like that. that's all i know." [PXThis Boards] 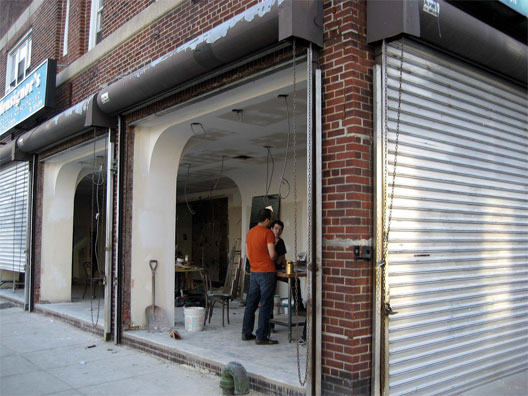 3) Williamsburg: Plywood photographer extraordinaire Will Femia reveals what's to become of the shuttered Monsignor's space: "According to the fellow there in the black shirt the old Monsignor's space will be a Mediterranean Bistro (above), opening in about a month, 'closer to June.' No Starbucks/Bank/Drug store. Phew!" [A Test of Will]

4) Upper East Side: "I noticed a sign in the window the other day indicating that a new Wondee Siam will go into the spot formerly occupied by Samalitas on 3rd avenue between 80th and 81st streets." [Plywood Inbox]

5) Fort Greene: Word from the Record: "The former Bodegas space at the corner of Clinton and Fulton finally has a future. According to neighborhood sources, the posse behind Fort Greene staples Pequena, Moe's, Maggie Brown and Olea have won the beauty contest. We haven't heard what they intend to do with it but it's safe to say it'll be a whole lot better than the Applebee's that was rumored to be under consideration." [Brooklyn Record]