Share All sharing options for: The Gatekeepers: Julian Niccolini

This is The Gatekeepers, a photo series Eater has commissioned from Michael Harlan Turkell. Herein, we're pleased to introduce you to the fine ladies and gentlemen that stand between you and some of your favorite impossible-to-get tables. 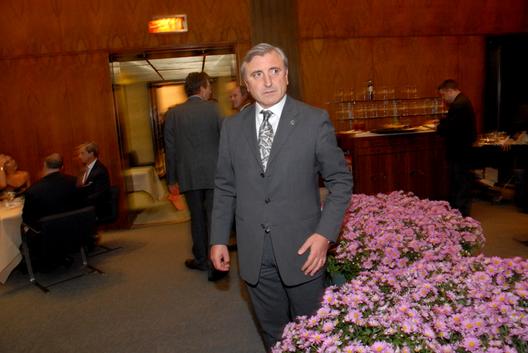 The Four Seasons is a New York institution and treasure. It is the most quintessentially New York restaurant in the city, by a margin, and even detractors concede a meal here is an experience unlike any other. During lunch on most weekdays, there are few places on the planet where you'll find a more powerful collection of people than in its front room, the Grill Room (the expression 'power lunch' was coined here). The Pool Room, the large back dining room, is by some considered to be more comfortable and aesthetically pleasing -- it is the room of choice for dinner -- but the action that makes the Four Seasons the Four Seasons is in the Grill Room. There are fewer days that a president or mayor or Murdoch or Tisch are absent than days on which they're all present. The gentlemen who choreograph this dance of moguls, high-ranking officials, billionaires and A-list celebrities are owners Alex von Bidder and Julian Niccolini. You will not get a table in front without knowing one of them personally, and well; even if you do, they may relegate you to the back of the Pool Room until you've paid your dues.

Julian: "In all my 25 years plus, the most difficult table to get is lunch. Runs from 12PM-2PM. There’s the Grill Room and the Pool Room, 33 tables in the Grill. 39 tables in the Pool. The space is so big that we can always add tables. Bloomberg is giving a speech here today. Ralph Lauren and Diane Von Furstenberg were just here. There’s only 1 seating for lunch, and we can’t say no to our regular clientele, and they come more often than not.

[Handshake; Handshake; Tina Brown nods on her way by; handshake from Ray Kelly] 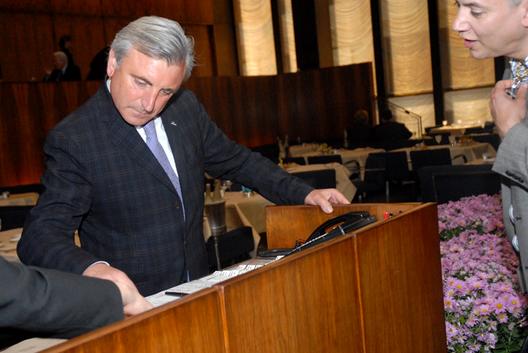 "It’s all the same regulars. Pete Peterson, founder of the Blackstone Group (points to him) ?"

[Man leans in and asks Julian “Can I get a table for 2?”. Even though it’s already 2PM, Julian sets a table up near the bar.]

"95 people in the Grill, 120 people for the Mayor’s event in the Pool. There’s private dining for 30 in another room. We just did a diner the other night for 340. It was a regular’s birthday party, good customer, big bucks."

[Someone comes up to Julian and whispers a lengthy conversation in his ear. Handshake. Nod. Wave of acknowledgment as he exits.]

"Larry King just had a party here for his 50th year in the news."