It's the end of the day, and thus time for a dose of 'wire. Strap in, we've got a lot of ground to cover. 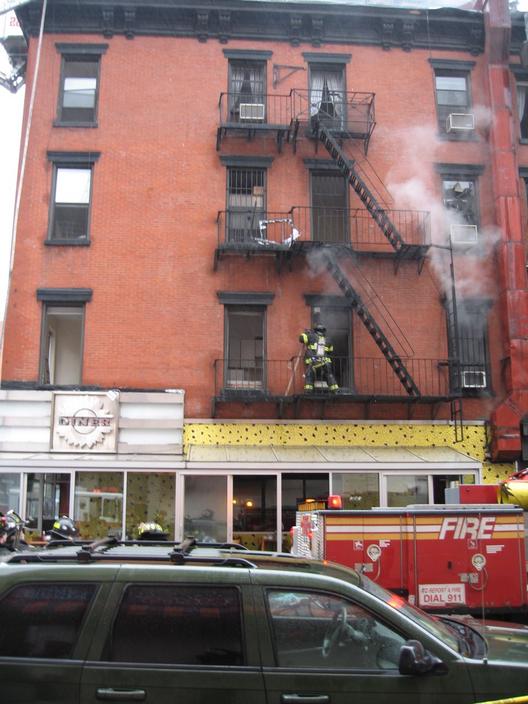 A reader who lives in the neighborhood sends this image of the fire-gutted Sunflower Diner on Third between 26th and 27th Streets.

TRIBECA—The rumor mill is once again churning about Paul Liebrandt's supposed takeover of Montrachet. Drew and Paul have been seen together in public several times of late, such as at Food & Wine's Best New Chefs private dinner party, and there's also word from the pavement of activity at 239 West Broadway, ie. Montrachet. Excerpted from an intrepid tipster's dispatch: "I live around the corner from Montrachet and something is happening. Plenty of people in and out of the space for the first time in months. Just guessing here,but planning for something might be underway." [EaterWire]

LOS ANGELES—The winner of this year's Pulitzer Prize for food journalism has been announced: the recipient is restaurant critic Jonathan Gold of LA Weekly. He's the first food writer to ever win a Pulitzer Prize for Distinguished Criticism. [Eater LA]

MIDTOWN WEST—Never have the words "midtown hotel restaurant" excited us as much as they have in conjunction with Johnny Utah's, a bar-restaurant rumored to be opening complete with a mechanical bull. A tipster writes, "Johnny Utah’s will be located in the Rockefeller Center Hotel, 25 West 51st. I believe it’s the old Club Quarters Hotel." Sure enough, there it is on the hotel's website. [EaterWire Inbox] 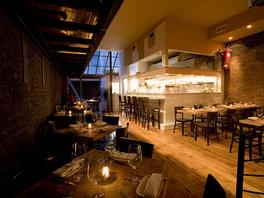 NOHO—Mercat, the Spanish tapas restaurant that frustrated many a diner and food writer alike by falsely announcing its opening over a month ago, may actually be opening tomorrow tonight. If you are planning on stopping by, we advise a calling ahead, given the joint's history. [RG; Chowhound]

MURRAY HILL—A reader who lives in the neighborhood sends an image of the fire-gutted Sunflower Diner on Third Avenue between 26th and 27th Streets. "Drama started around 6AM today. Pretty solid damage to some apartments and local businesses. Sunflower diner got trashed if not destroyed. This happened last year between 26 and 27th where the new building is for all the conspiracy theorists out there. I'm one for sure." [EaterWire]

WEST VILLAGE—If you've been waiting with baited breath for the opening of P*ONG, the new restaurant from pastry chef Pichet Ong, well, we congratulate you, because the place has been a long time coming. Now's the time to get excited, as we learn that the P*ONG kitchen will be cranking out food as early as tomorrow. A reader writes, "Just got off the phone with them. Set to open tomorrow, but the first 3 days will be a private friends-and-family opening. They begin taking reservations tomorrow for Friday, their first official open-to-the-public evening." [EaterWire Inbox]

MIDTOWN WEST—Though the river of reported DOH-shutterings has dwindled to but a trickle, establishments are still being closed down quite regularly. The latest eatery to fall is House of Pita on West 48th Street between Fifth and Sixth Aves. [Mouthfuls]