The Shutter reports on restaurant and bar closings around town. Seen someplace drop the grate for the final time? Do let us know.

1) Midtown East: An Eater reader emails: "Chikubu, the excellent Japanese eatery on 44th Street between Fifth and Madison, has closed. The doorman in the building said that the owners have decided to retire back to Japan. It was known for its spectacular Friday ramen lunches, with lines going out the door; delicious hitzumabushi; and evenings, for a wide and weird array of incredibly expensive seafood delicacies flown in from Japan. Japanese businessmen on expense accounts and hungry eaters in the culinary wasteland that is this section of Midtown will miss it." [Shutter Inbox] 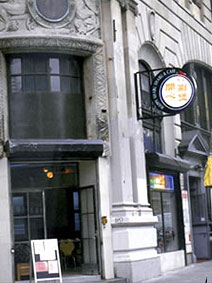 2) Chinatown: A reader report on an upcoming Shutter: "So my girlfriend and I have been eating at the Happy Shabu Shabu at the corner of Orchard and Canal Streets (right) for almost four years now. Needless to say we were devastated last Saturday when we heard from our favorite waitress there that the Shabu is closing and the building is being converted. Now, this woman's English isn't very strong, but the message was clear: the Shabu is closing for good, and it's likely to happen in the next two to three weeks. I thought she mentioned something about the building becoming a hotel or something. My girlfriend, even after studying in China for some time, swears this is one of the best hot pot restaurants in the WORLD. Even if that isn't true, it is true in our hearts and we are deeply saddened at this news. Anyone who loves this place as much as we have should get in there right away and as often as they can for the next few weeks." [Shutter Inbox, photo courtesy official site] UPDATE: Curbed had word way back in 2005 of this building going hotel. Note dramatic foreshadowing.

3) Harlem: "Food up in Spanish Harlem is closing up this week." A special Eater correspondent provides some color on the news: "Those food owners either don't have any luck or are extremely bad businessmen—they owned a place in the same space that closed not too long ago (think it was called Diner24, but I could be wrong). Anyway, there is absolutely no competition in that area whatsoever, and Food got ok to good reviews. Wonder if they'll try for another resto in the space." Either way... Shuttttttter! [Shuter Inbox]