Plywood, it has been said, is nothing without photos. For this edition of the Plywood Report, then, all is glory—photos galore of places preparing to open around town. Have a digital camera handy yourself? Get in on the fun. 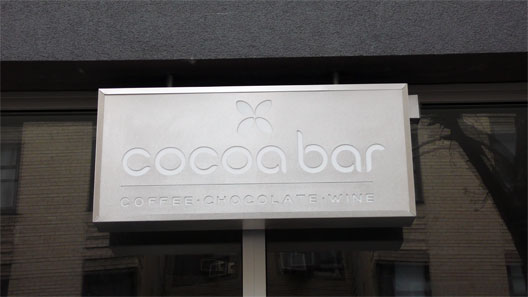 1) Lower East Side: A tipster emails, "I'd like to inform you that Cocoa Bar just revealed their sign on Clinton between Houston and Stanton, on the first floor of one of the new apartment buildings that just went up (above). Clinton is quickly becoming a serious restaurant destination and this addition appear to be attacking the mid-market, which is smart because the top end there is just ridiculous, WD-50, et al. This place still has paper up - but the sans serif font is advertising chocolate-coffee-wine. I do wonder whether this could possibly affect the awesome guys from Bologna at Piada. They make the best cappuccino in NY—low-pressure steam doesn't wreck the milk, great beans, doesn't need any sugar. Perfect." [Plywood Inbox]

2) Midtown: The easiest way to the Plywood Report's heart? Post photos of restaurant plywood for us all to enjoy, as Marco Canora the guys from Hearth have done with Insieme, the new restaurant slated to open Monday in the Michaelangelo Park Hotel covered earlier today in Dish (and first revealed in a Plywood Report from a month back). Above, photos from their photo page; herewith, an Eater-on-the-street reader report filed yesterday: "I walk by this place every morning on the way to the office, and the brown paper just came down from the windows today. In their place are white stringy curtains, and the awning with logo is now up!" [Official Site/Plywood Inbox]

3) Williamsburg: Emails a tipster, "I happened to have my camera with me and saw the door open (above). Seems like they've been taking dirt out of the garden in back for weeks. Here's what the DOB says about ownership: 'RED BOWL CHINESE REST. INC 208 BEDFORD AVENUE.' I prefer the name on the CB1 site: "Red Bowl Chinese Restaurant Inc. d/b/a Crazy Chicken)." [Plywood Inbox] 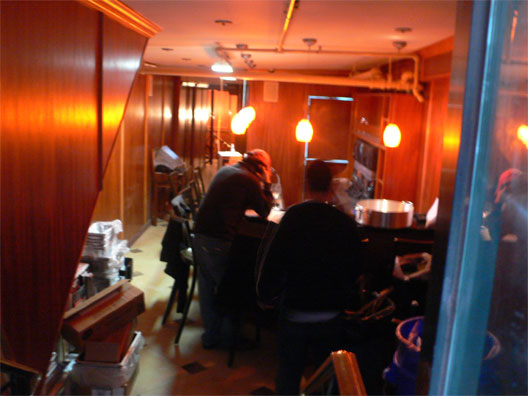 4) Nolita: Flying totally under the radar is this forthcoming restaurant on the block of Spring Street between Bowery and Elizabeth that already plays host to Sweet and Vicious. We're hearing American diner cuisine theme. [Plywood Staff] 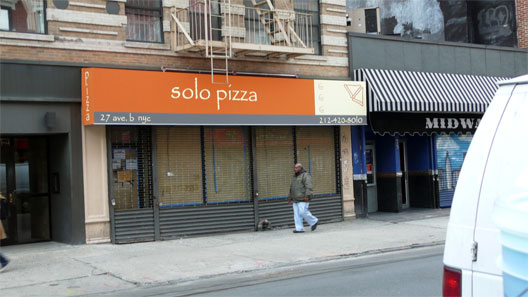 5) East Village: A special Eater correspondent sends along the above photo of the forthcoming Solo Pizza on Avenue B. Cutting-edge pizza concept unclear as of press time. [Plywood Staff]

6) Upper East Side: This news deserves higher play, but you know what? No photo. A reliable source informs us that chef Kevin Garcia of 'Cesca is opening a new wine bar in the Mainland space on Third Ave in the 60s. Doors slated to open in the next couple of months. Italian, pizzas, salumis, and plenty of Italian vino. (N.B. this is absurdly similar to the FAILED Hosteria Florella, an ital that occupied the space circa 1997.) [Plywood Staff]

7) Upper East Side: A final photo-free tip: "Just walked by the old Googie's Diner space on 78th and 2nd and discovered that the restaurant to occupy it's space will be VYNL. Safe bet that it's an outpost of the Hell's Kitchen spot." [Plywood Inbox]