EaterWire: Caffe Falai Without Power & So. Much. More.

Share All sharing options for: EaterWire: Caffe Falai Without Power & So. Much. More.

SOHO—Leading with some breaking 'wire, Eater has just gotten word that Caffe Falai on Lafayette between Prince and Spring, has been temporarily closed due to power failure. May we redirect you to chef Falai's eateries on Clinton Street, which are up and running. Caffe Falai is slated to reopen tomorrow. [EaterWire]

NORTH CHELSEA—A benefit will be held tonight at club Cielo from 7 to 11pm to raise funeral funds for Gregory Lewis, who served as a doorman there before passing away on March 20th. Donations will be collected at the door. [EaterWire] 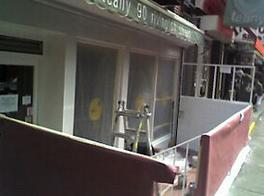 LOWER EAST SIDE—Moby's teahouse and cafe Teany (pictured) is temporarily closed, as the spot is getting a new paint job, to reopen as shiny as it's owner's pate. [EaterWire]

NOHO/EAST VILLAGE—Sushi spot Bond St, closed recently due to fire damage, is set to open even earlier than predicted. From a reliable source, "I just noticed on your website that you listed BondST re-opening April 20. That information is incorrect. BondST is taking reservations for a Monday, April 16 re-opening." People, the line is 212-777-2500. Dial away. [EaterWire]

SOHO—A reader, looking closely at the results of last night's TONY Eat Out Awards, wonders "Can a restaurant win "best new of anything" twice? Well, you would think that is pretty much impossible right. After all you cannot be new and then, new again. Think again, because the kids over at Time Out awarded best new seafood restaurant in 2005 to Lure Fishbar....and guess what, last night they did it again." We checked in with Eat Out Editor Gabriella Gershenson, who said, "As for Lure, yes, we nominated them for 2007 because of the post-fire re-opening (we re-reviewed it last year for the same reason--5 stars, I believe). In both 2005 and 2007, Lure won in readers' choice categories, which means that although we nominated them, the readers voted them winners." [EaterWire Inbox]