1) West Village: Above we see Plywood vet Pong, a new dessert bar on West 10th (between Greenwich Ave. and Waverly), moving right along. But will it open before the clock runs out on the micro-dessert-place-trendlet? [PLYWOOD] 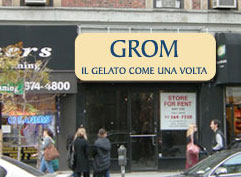 2) Upper West Side: Whoa, here's something. Grom, an Italy-based chain of artisinal gelato, is prepping a storefront (right, awesome photoshop image via official site) on Broadway at 76th. Says the eGulleteer who broke the news, "Grom's website states that its production is centralized to maintain the quality of the product and the uniqueness of the flavors. Some of GROM's flavors are made with ingredients that are on Slow Food's Ark of Taste, including Huehuetenango coffee, Bronte pistachio and Ciaculli mandarin." Adds another eG'er, "If it's as good as the GROM in Florence, you're in for a treat. That's good stuff." [PLYWOOD]

3) Midtown East: A tipster emails, "The old Billy's steakhouse space on First between 52nd and 53rd is becoming a new McAnn's. Work seems to be underway but looks to be progressing very slowly. (They were reviewed by community board 6 a few weeks ago, apparently successfully.)"

4) Upper West Side: Activity is most definitely underway in the shuttered @SQC space on Columbus between 72nd and 73rd (above). Notes photoblogger WhatISee, "The first thing to go was the amber colored greenhouse... This is going to make it a much smaller location, perhaps even a 1/3 smaller." No intel yet on what's to come here. [PLYWOOD]

5) Lower East Side: Sayeth a tipster, "At 192 Orchard Street: Small greedily overpriced spot which was formerly a hot dog spot and then more recently and briefly Trotsky Cafe is soon to become yet another bbq/american type spot." The Real Estate has more on the spot, which will go by the name Georgia's East Side Barbecue. [PLYWOOD?]

6) Lower East Side: Finally, in what's suddenly becoming a very over-pizza'd Hell Square, another newcomer preps to make a go of it. A tipster sends along the photo below with the note, "At 121 Ludlow [between Rivington and Delancey] In the ground floor of an old synagogue, it appears we will have a new pizzeria!" Ladies and gentlemen, the countdown to Chickie Pig's commences now. [PLYWOOD] 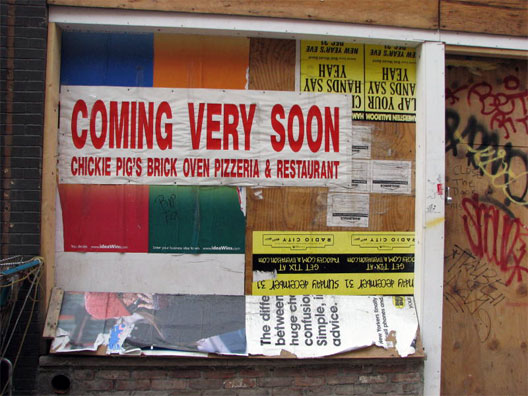