1) Lower East Side: Above we see the most aggressive LES plywooding since Keith wrapped Schiller's. An Eater tipster writes, "Rob from Fat Baby (which is across the street) is opening a 'trendy' restaurant in the old Spitzer's Dresses location. Expected opening is June 2007, no name or concept info as of yet." Plywood went up earlier this week; note THOR at far left. [PLYWOOD, previous coverage]

2) The Village: Morse-code style intel from another tipster: "Plywooded noodle joint next to lapalapa on lower 6th. across from basketball courts is soon to be sushi restaurant of the highest order. Chef has Food and Wine best new chef honor from mid-nineties. Renovations by design/build team that did Chikalicious, Jewel Bako, Momofuko etc. To open? Maybe end of March." [PLYWOOD] 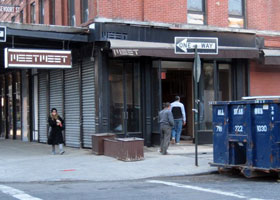 3) Meatpacking: Emails a tipster, "Looks like Meet on the corner of little W. 12th and Washington is finally being gutted (right). I haven't heard what's coming in but that corner seems cursed." Per Eater staff reports, the space is to become a Mexican restaurant from David Rabin et al. Sit-down restaurant and takeaway cafe. [PLYWOOD]

4) Upper West Side: Ah, sweet Shutterwood: "My fiancé and I LOVED Sipan (94th and Amsterdam), in fact we were planning to host our rehearsal dinner there in early 2008. They've been closed for renovations for weeks and just recently we noticed that their sign was down, and replaced with a new sign for Pio Pio Salon and just this morning we noticed a new menu posted. I've done a little research and see that there's an UES Peruvian restaurant called Pio Pio and I wonder if they're related. Regardless, the menu is significantly different—it's almost entirely focused on chicken (logical, given the name) and there are few seafood choices. The biggest loss on the menu, from our standpoint, is the wonderful ceviche that Sipan offered." [POST-PLYWOOD]

5) Midtown West: Following up on the news that Savannah Steak is no more, a tipster writes, "I sold some wine to them and they knew several months in advance that they were closing down- it wasn't the board of health. The owners of the building, a Japanese firm, wanted the space where they plan on opening a Japanese restaurant by year's end." [PRE-PLYWOOD]

6) Midtown: More from the center of the universe via Midtown Lunch, who reports that a new Asian grill called Kushi-Q is underway on Third Ave. Then he drops the bomb that Popeye's is also returning. [POST-PLYWOOD, PLYWOOD]

7) Williamsburg: Two bits of intel. Eater photo pool contributor liquidsalad secures proof that Silenth Viet Tapas Bar is seconds away from opening, while Will Femia spies that someone has secured the lease on the old Monsignor's location; future TBD. [POST-PLYWOOD, PRE-PLYWOOD]

8) Lower East Side: "There's a place on Division St, between Allen and Canal ­ It has the word Bacaro (recently) painted on to the security grill. Construction wise it looks like its about 4 weeks away from being finished." [PLYWOOD]

We can't cover the Plywood beat without you. Please consider joining the fun.