Share All sharing options for: Week in Reviews: Strip Club Bests Kobe Club By A Star

1) Frankie Tatas files on Robert's Steakhouse at the Penthouse Executive Club this week. In his one star massage of chef Adam Perry Lang, you wouldn't even know the guy was operating a steakhouse in a strip club:

At Robert’s Steakhouse I got char, richness, depth and a more pronounced degree of aging, an unmistakable tanginess that accentuated and stretched out the beef’s flavor. I got it in the bone-in strip steak ($53), the rib-eye for two ($104) and the porterhouse for two ($106). All of these had spent at least 6 and as many as 10 weeks in a special vault where their custodian, Adam Perry Lang, rigorously controls the humidity and the air flow.

Mr. Lang, the restaurant’s executive chef since it opened in 2003, is a serious carnivore. He divides his time between Robert’s and Daisy May’s barbecue, which is nearby and which he co-owns. His résumé includes Guy Savoy in Paris and Daniel on the Upper East Side.

Near the top of the review there's also some other stuff about Dreamgirls and singing, but we'll let you get to that bit yourself. Sidebar bonus: Jeffrey Chodorow gets to 'Follow Frank' to a strip club, which can't upset him too much. [NYT] 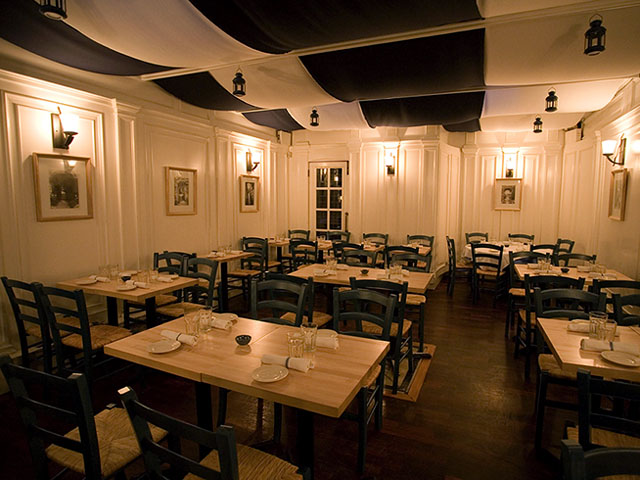 2) New York's Underground Gourmet breaks out their hollow stars (Platt's are filled in) and throws a whopping four the way of Kefi, Michael Psilakis' reinvention of his Onera space. The critics Rob, they are pleased:

Even in this trad-Greek framework, Psilakis manages to slip in the occasional refinement. His savory spreads arrive in elegant teardrop-shaped vessels, and his “open” spinach pie is more like a portion of good creamed spinach spooned into a cradle of crisp phyllo dough. If you like meatballs, Psilakis makes two of the best versions in town. One is a crock of airy beef-pork-and-lamb orbs, smothered in tomato sauce infiltrated with whole garlic cloves and halved olives. The other is an ethereal version of the Greek soup avgolemono, stocked with a small platoon of bite-size veal meatballs.

3) Peter Meehan in a rare Manhattan $25 and Under is also at Kefi this week. His take:

Regardless of what you make of the room, the menu is immensely appealing. Its range is part of the appeal: the conservative diner could start a meal with a brilliantly composed Greek salad; others might be more enticed by expertly crisped sweetbreads, accompanied by artichokes. But it’s the low prices that drive the deal home: I have paid more for tuna salad sandwiches than I did for those $7.95 sweetbreads, prepared in same kitchen that was widely praised for its all-offal tasting menu only months ago.

He is also kind enough to play sommelier, suggesting a the barrel-fermented moschofilero from the Tselepos winery priced at a wallet shattering $39. Scandal alert: Did Meehan spend Times cash on a clearly-over-$25 bottle of wine? Developing. [NYT]

Elsewhere, Alan Richman will be returning to Boqueria until he's 'too old to scale those stools'; Randall Lane three-stars Gramercy Tavern a new one; Tables on being among the commoners at Waverly Inn: you get the idea they’re having even more fun in first class'; Paul Adams at the 'distinctive and consistent enough'