Here's a riddle: What comes after a strict media blackout? Why, the media marketing blitz, of course. The official details about GoldBar have arrived, friends, and arrived big. Before we go any farther, understand that the contents of this edition of Inside are supplied entirely by official sources. We've been inside and that's another story. This here is a portrait of GoldBar as its owners intended it to be painted.

First of all, the players are as follows: Said owners are Jamie Mulholland, Robert McKinley, David Tetens and Jayma Cardoso; Design is by McKinley, with help from Rachel Cobain; Steve "we will not be doing memberships" Kasuba is the marketing chief. The key name at the door is Patrick Cabido, who is the manager (never drop the owners name: too obvious).

Above, the main room of the venue is pictured; below, the front bar room. 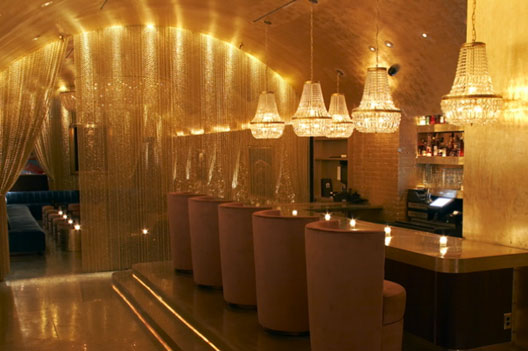 There is an official Goldbar history, and it is as follows:

Once upon a time there existed an Italian count of unknown wealth whose story was not familiar to most until now. His lineage, while questionable, was nonetheless prominent. His quest for life's fineries was insatiable and his love for gold excessive. Whilst he set about accumulating possessions, his family plotted around him. His ignorance was noted and many took advantage. When he finally caught on, he was determined to share his vision with those outside the family. He chose to open his doors to others with similar appreciation for the beauty and opulence that gold afforded. His dream was to be appreciated, to be admired. This is his story.

Still with us? Final detail: there are food and happy hour angles as well, which makes for an interestingly useful venue, provided the rope doesn't come out until 10 PM.

So there you have it. The only question that remains is, Now that they're admitted it's opened, do we still want in so badly? A riddle indeed.