MEATPACKING—French diner Florent was, for over 20 years, a cash only establishment. Apparently, last week management at the Meatpacking District institution decided to begin accepting credit cards. Alerting us to the change, Blog Chelsea writes: "Just last week, after attending the Andy Warhol Wake at the von Buhler gallery, we decided to grab a bite to eat at Florent, since we were in the neighborhood. Since the meatpacking district has changed so much lately we weren't sure where to find an ATM machine, but decided that Darinka, the hostess would probably know. When we sat down, however, Darinka must have read our minds. "As of last week, we take credit cards," she said. Sacre bleu! Just another nail in the MePa coffin? [Blog Chelsea] 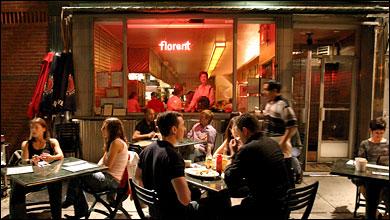 Already known for providing Upper East Siders a space for leisurely lunches and intimate dinners, Sfoglia has announced plans to offer a breakfast that will highlight the pastry skills of chef and co-owner Colleen Marnell-Suhanosky and, owners hope, will bolster a sense of neighborhood camaraderie. Breakfast will begin in March 2007, and will run Mondays through Saturdays, from 7:30 a.m. to 11:30 a.m. Marnell-Suhanosky will serve bombolini, tramezzini and parfaits of house-made muesli and goat's milk yogurt. There will also be breakfast tortes, fresh squeezed juices, Americanos, cappuccinos and espresso.

Bombolini and espresso—a combination that never fails to get our salivary glands working. [EaterWire Inbox]

LOWER EAST SIDE—A reader emails with a follow up to yesterday's item about Kebab House, with some additional neighborhood intelligence. "the kebab house has been up for sale for almost six months, and started around ($400,000). your favorite douchebag restauranteurs Martinetti Bros are trying to dump their bar on Houston after a ten day license suspension. There has been talk about the LoSide being bought and applied for as an Irish bar." Brothers Martignetti are, as you might remember, busy with their new restaurant Bar Martinetti and downstairs drink spot Belgrade. [EaterWire Inbox]

FLATIRON—Construction on Chodorow's upcoming restaurant Spotted Dick, which we discussed way back in July, has commenced. A tipster reports, "Just when you thought the industry had learnt what a graveyard the spot on 22nd St. between Broadway & Park is...someone else is going to give it a shot. No idea who yet but they were stripping out all the old stuff today as I walked past....Black hole anyone...." Insert Chodorow/dick joke here. [EaterWire Inbox]

WILLIAMSBURG—We learn more about the sudden shuttering of Vietnamese restaurant Silenth, courtesy of a forwarded email:

We are very close. I see no reason why we won't get our permit approved on Tuesday March 6th. Which means we can be open for real on Wed. March 7th! Thanks to everyone for all the patience, the funny voice mail messages, and the continued support on the various food blogs that will surely help spread the local rapport and garlic fish breath. This extra time has allowed me to catch up on lost sleep in the 60 day monster build that we took on for hand-made/home-grown Silenth. We will be ready to show you some Vietnamese hospitality, Brooklyn style.

It's entirely possible, of course, that this forward came from the very same shill team that brought the restaurant to our attention initially. After all this hype, they better serve a bangin' banh mi. [EaterWire Inbox]