On The House: Welcome to New Hollywood, Part I

Share All sharing options for: On The House: Welcome to New Hollywood, Part I

On the House is our weekly column written by the owners and operators of the great food and beverage establishments of New York. Your resident proprietor is William Tigertt of Freemans.Today, Part I of Welcome to New Hollywood; tomorrow, Part II.

The New York City dining scene and Hollywood have never had more in common. Both of these coastal industries are expensive, risky ventures where only the best financed insiders call the shots and make big money. Like the rise of the Hollywood studio system in the early twenties and thirties the dining landscape in NYC is in the middle of tectonic shift. With the costs of New York City real estate, labor, and goods skyrocketing – the mid ground for restaurants is drying up. Right now in Manhattan with a few noted exceptions, the most successful new concepts are all mega-extravagance blockbusters, or down and dirty indie gourmet street food. Leases, funding, and personnel for anything in the middle are a tough sell.

Restaurant groups and well established restaurateurs with half a dozen properties under their belt are the new movie moguls.

Small projects simply aren’t worth their time and energy, because establishing any venue, be it a 20 seat counter restaurant or 300 seat behemoth requires all of the same steps and hoops to jump through. The difference is money. If the small place is successful you can clear hundred to $150k a year—not a bad living for a single owner operator, but less than the flower budget for a budding NYC restaurant empire. In contrast, if the Vegas-style megarestaurant hits it out of the park, the paycheck is eight figures mega.

As big money is drawn to the table interesting programming mixes flutter about, but just like the movie biz, projects follow established trends. For the past two seasons, Asian Action-Adventure has been the meme du jour. Enter the Jeffrey Chodorow’s Kobe Club. This new eatery hits all of the key elements with swords, bloody steak, and dark, ominous set pieces. If it’s a hit, it’ll be sure to play well overseas like their previous Asian-Caribbean Romantic blockbuster, Asia de Cuba. 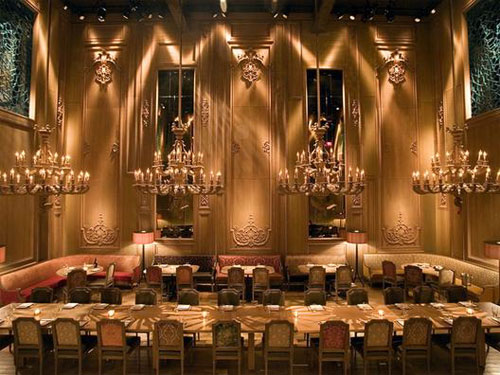 Not into Kung Fu? How about some old fashion T&A? David Burke’s respectable cooking is combined with softcore action at Hawaiian Tropic Zone complete with a nightly bikini contest. Everyone over 18? Go check out the steamier Rated R show and two-star steak at the Penthouse Executive Club. Both concepts have been very successful and are spawning a series squeals in other markets. I predict a burlesque themed restaurant to launch somewhere downtown within the year. Oh, wait: You can already sample delectable finger food at The Box while the gorgeous Hammerstein Beauties perform the Can-Can.

The rules in movies and the rules in eating are becomming the same: the more sell (celebrity chefs, side show attractions) the better; make it accessible, understandable and unchallengingly tasty. Four block long line for Shake Shack, anyone?