Here's this week's Plywood Report on yet-to-open restaurants and bars around town. Have you seen the telltale wood in your neighborhood? Drop us a line. 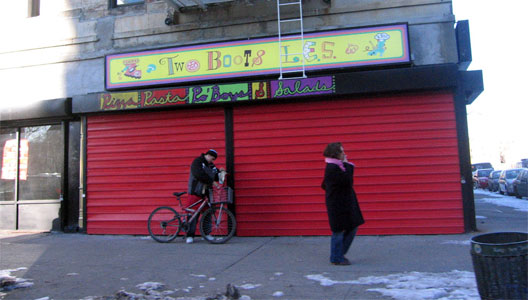 2) Soho: "Not sure if this is on you guys radar but the very good Aurora in Williamsburg has announced a Soho location." The official site has the confirm: Broome (at West Broadway), with a February opening date touted. [PLYWOOD?]

3) Gramercy: "The tarp was down briefly the other day @ 233 East 14th Street (btwn 2nd & 3rd Ave) and the sign read Blind Pig Bar and Grill. Know anything about this place?" Blind Pig—straight from the cheap mashup school of restaurant naming. [PLYWOOD]

4) Midtown West: An Eater reader emails, "I found a little snippet about the owners of Geisha and Serafina [Fabio Granata] opening a french themed resto at 1740 broadway [at W55th]. if you've heard anything further please let me know." Initial intel pointed to the long-shuttered Noche space, but the addresses don't match. Who knows more? [PRE-PLYWOOD]