Rebirth is on the way, but let's take care of some dirty work first in this relatively merciful installment (if your establishment doesn't end in apostrophe-s) of The Shutter. 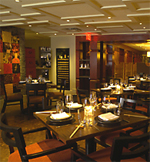 1) Upper East Side: Easy come, easy go in a space that was until fall the home of Mainland. Emails an Eater reader, "Ollie's Brasserie on 3rd Ave. (right) is closed. I just went by and the windows were papered up and the signs are down from the front of the building." A call to the establishment reveals that it's a two-week temporary shutter for renovations. Mmhmm. Paging the Deathwatch committee... [Shutter Inbox]

2) Williamsburg: From The Kalina himself: "Coney's in Williamsburg on Bedford and South 1st seems to have shuttered. The phone line is disconnected." Annnnd scene. [Shutter Staff]

3) Park Slope: The Brooklyn Paper reports that longtime neighborhood bar Snooky's has closed. Shutterwood cometh: "The good news is that Snooky's former manager — known neighborhood-wide simply as 'Jose' — says he will replace the landmark with an Italian restaurant that will open next month."[Brooklyn Paper]