1) West Village: Above, from the ever-crackling lens of Eater photographer Noah Kalina, it's new coffeeshop Mojo set to open soon at Greenwich Street and Charles. Feel the love. [PLYWOOD]

2) Central Village: A reader tip reposted from a recent Storefronting report: "Saw a note on the vacant store on 11th and Broadway, which used to be an antique store (across from the Halloween store down the street from neighborhood mainstay Wagwear) that the board had approved the new retail tenant, so apparently Le Pain Quotidien is moving in." [PLYWOOD]

3) East Village: Catching up on some week-old news, courtesy of man about town Steve Cuozzo: "The owners of popular eateries Jane (on Houston Street) and Neptune Room (on Amsterdam Avenue) are expanding their reach. Jeff Lefcourt and Glen Harris have signed a lease at 55 Third Ave. [at East 11th] for a new, 4,500-square-foot bistro." [PRE-PLYWOOD] 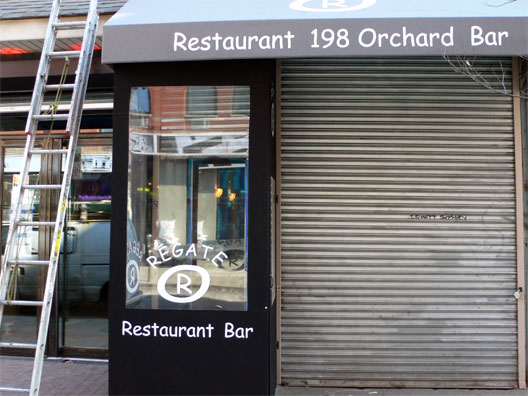 4) Lower East Side: We'd like to feel more positive about Régate, an eatery opening soon in the former Basso Est space on upper Orchard Street, but use of Comic Sans as an awning font is of course Deathwatch indicator #27. [POST-PLYWOOD]

5) Brooklyn: Quick plywood roundup from Brooklyn bloggers: Will Femia spies two new joints coming to Williamsburg; A Brooklyn Life notes that Jessie's Brooklyn Kitchen is set to open soon on Smith Street in the old Viola space; and the Clinton Hill Blog reports that it's soon to be a Bagel World, folks. [PLYWOOD 3x!]

Seen Plywood in your neighborhood? We'd love to hear about it.