What better way to brace for the New Year than by checking in on some of the new restaurants that will grace it. Yes, it's time for the very last Plywood Report of 2007. 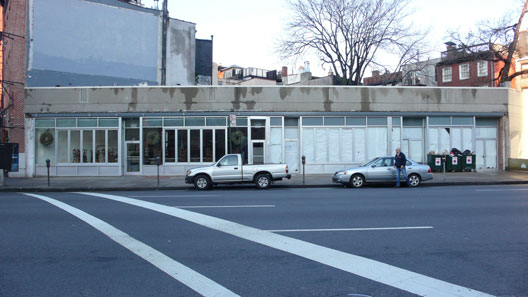 1) West Village: Above, what we’re looking at here is Tasca, the Hall-repped, flash-in-the-pan tapas restaurant at the corner of Seventh Ave South and W10th St, and the carcass of Central Kitchen. Word is that the two spaces are going to be combined into a restaurant for former Biltmore Room toque Gary Robins (too, of Russian Tea Room debacle fame). Robins is a capable chef, great at times, per reviews, but if he thinks his haute price point and food is going to work on this block, Kamali is going to get this venue back in six months. [PRE-PLYWOOD] 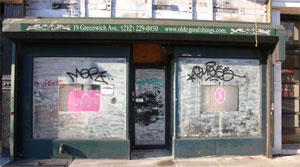 2) West Village: At right, Sweetiepie, on Greenwich Ave. (between Christopher/W10th St.) Seems self-explanatory at present, though it bears noting that the restaurant had applied for a liquor license at this address, as we reported awhile back. Possibly of import: Murray Rubin's Birdbath is two blocks away on Waverly and Seventh, Jack's coffee is half a block around the corner on W10th, and Joe is three blocks South on Gay and Waverly. And none are closer than Lafayette French Pastry, a long-time fixture across the street at 26 Greenwich. So, this isn't a neighborhood in need of coffee and cakes, but a good cupcake could make for an interesting show." [PLYWOOD]

3) West Village: A tipster emails, "A new dessert restaurant of some sort going in the old lilac chocolates space at 120 christopher. i live in the building above and spoke to the woman locking up the other night as she was leaving...she said they're hoping to open in january...looks like they've got dark gray slate or tile down on the floors, the lower half of the walls, and as facing on a bar or counter to the left of the doorway...upper parts of the walls are still plywood...they also noisely installed a huge new exhaust system in the alley right underneath my window, but i digress." [PLYWOOD]

4) Upper East Side: 78th and 2nd reports, "The boards came down at the former spot of First Wok on 78th and 3rd on Sunday, and something called Liz Kelsey has set up shop." Hmmm. [PLYWOOD] 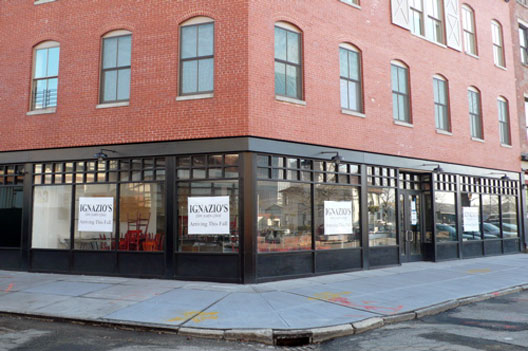 5) Dumbo: Brownstoner scored the above picture of Ignazio's, a new pizza parlor that is daring to open up a mere stone's throw from Grimaldi's. A good pizza war is always a good time. [PLYWOOD] 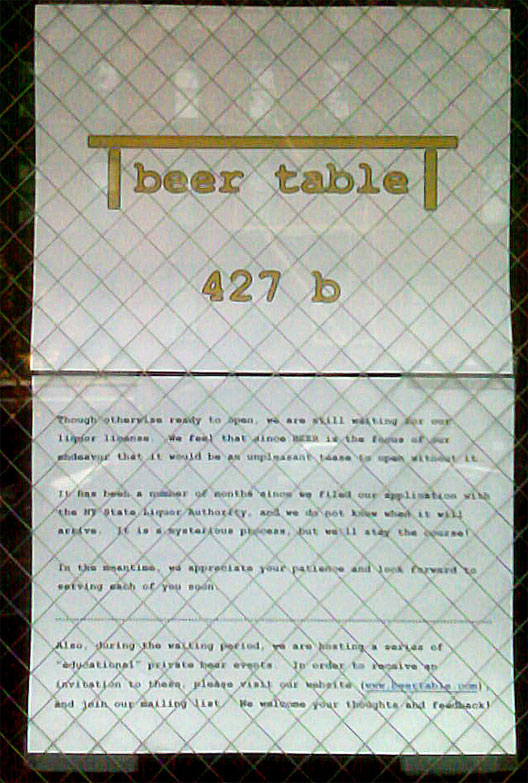 6) Park Slope: Finally, on Seventh Avenue in Park Slope, we have Beer Table, whose signage declares, "While otherwise ready to open, we are still waiting for our liquor license." [POST-PLYWOOD]