In 2004, it was Fort Green. In 2005, Prospect Heights. And in 2006, West Harlem. Once again, the time has come for Curbed, Eater, and Racked readers to name the Neighborhood of the Year, the winner of the Curbed Cup for the neighborhood that most defined New York City this year. What started as a 16-team tournament back in early December comes down to this: the #4 seed, the West Village, facing off against the #10 seed, Long Island City. Through the tournament, we've seen passion, frenzied indifference, and massive voting shenanigans. What will today's vote bring? It's time to find out.

West Village
2007 Notables:
· Palazzo Chupi, people. Palazzo freaking Chupi. Schnabel you madman!
· Washington Square Park: still bickering! Still the same!
· There was only One Jackson... but also only one Superior Ink
· Those apartments in the Meier Building? Um, yeah—awesome
· Meantime, Gisele got out her PriceChopper
· Morandi Fever swept the country city block!
· Dept. of Health takes down Magnolia Bakery over missing front sink
· There might be a Bleecker Street storefront Marc Jacobs hasn't taken over. Might.
· CondomMania closed; one less reason to go on

Long Island City
2007 Notables:
· There was a floating aluminum tree!
· A giant new rental apartment building opened!
· Other big developments were developed!
· Starbucks is eyeing the neighborhood!
· They're finally getting a real grocery store, maybe! 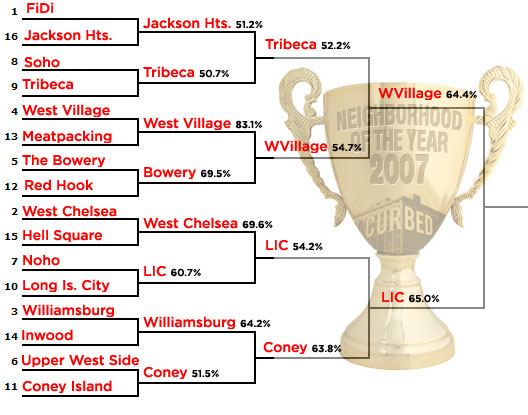 Polls will remain open for an indeterminate period of time, closing sometime between now and noon on January 1. Good luck out there.