Chumley's has been completely closed for the better part of a year, following a chimney collapse at the venue in early April. 8 months later, yesterday, Eater stopped by 86 Bedford Street to check in on the former speakeasy, one of the West Village's oldest and most prized possessions. It's a downright ugly scene at present. But first, let's review the Year 2007 in Chumley's news:

1/17/07: 82-86 Bedford, which houses Chumley's, is put on the market. Chumley's owners have a 99 year lease on the space, which has the bar looking reasonable safe through the sale.

4/5/07: A chimney separates from an interior wall in the bar area of Chumley's, rendering 86 Bedford Street highly unstable—and, to be sure, Chumley's closed for business.

4/6/07: Chumley's is closed indefinitely, while plans to stabilize the building are drawn up.

4/25/07: A 'months-long' process to dismantle the unstable chimney at Chumley's begins; workers determine the building is no longer in danger of a total collapse.

10/16/07: The reopening date for Chumley's gets pushed back to Thanksgiving, at best.

11/28/07: Ressurection date pushed back again, with a best case scenario getting the place open by March 1, 2008. “There are only two walls that are still up,” [Chumley's owner, Steve] Shlopak said. “The rest of the building is held up with construction scaffolding. There is no ceiling and there is no floor; it’s just a dirt hole..." 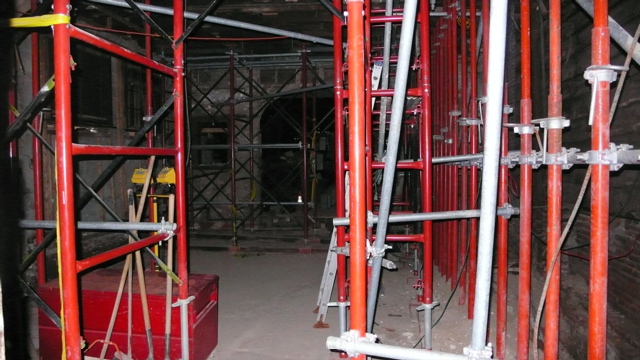 12/26/07: No work has yet begun on rebuilding the bar. What a site inspection yielded yesterday is that, while the chimney is now dismantled, nothing else appears to have changed since April—before yesterday, the last time the interior was photographed (by amNY). Shlopak has said the rebuild will take at least 90 days from the time it starts. If work begins just after the new year—and there's zero indication that it will— the new best case scenario for reopening Chumley's is April 1. The worse case scenario is quite a bit worse.