First Word: Pinch, S'Mac Team Up on Upper West Side

Share All sharing options for: First Word: Pinch, S'Mac Team Up on Upper West Side

When Pinch closed its doors on Park Avenue South last summer, the owners assured us that they were not done serving salads and "pizza by the inch." And now, via a missive that's hit the Eater inbox, we can confirm that they're good to their word.

Come early 2008, Pinch will reopen at 474 Columbus Avenue (at 83rd)—but not alone. Seems they've teamed up with East Village mac-n-cheese emporium S'Mac to double the pleasure, etc. Per co-owner Todd Birnbaum, "This dual branded concept will feature breakfast, lunch and dinner, indoor and outdoor seating, casual service, take out, catering and delivery. Our 'side room' will be available for private parties, special occasions and school groups." Quelle mashup! 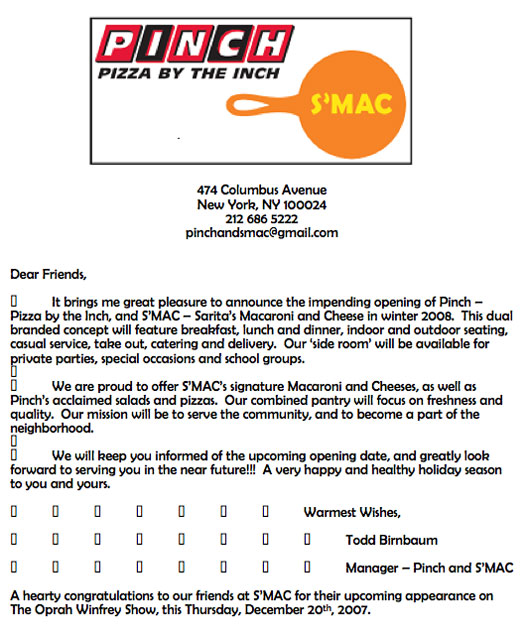 When Pinch closed last summer, they also made this promise: "We will be partnering with another concept and reopening on the Upper West Side by summers end. Upon establishment of the new location, we plan on opening many more locations, including a return to the Park Avenue South area." Looks like they're making good on the first promise; here's hoping they do on the second, too.

Now, on to the really important news: S'Mac's really doing up Oprah tomorrow? If so, looks like it'll be part of the always exciting "Gayle shares her latest New York City hotspots" segment. Yee-ow! Memo to East Village residents: enjoy S'Mac tonight, because the place is going to be well neigh impassible for the next three weeks. Minimum.
· EaterWire: Changes in the Works at Pinch [~E~]