Shutterwood is that special time when we report on an establishment's closure, and reveal what's next to come in the space, in the same post. This is one of those moments. 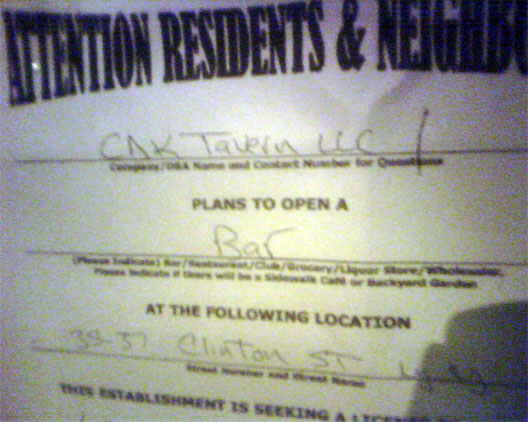 After mysteriously sitting dark for months LES neighborhood favorite Lotus Lounge (at the corner of Clinton and Stanton Streets) is officially shuttered. How do we come by this intel? By dint of a tipster who sends along the above image revealing a liquor license application for something that looks to be called Oak Tavern (see updated intel below)—in the old Lotus Lounge space. Tipster color: "Best news in a while, concerning the old Lotus—Lotus will not be a Starbucks (hopefully)! It remains to be seen whether it will be another douchebag-infested bar though. Hopefully not."
· The Curious Case of the Lotus Lounge [~E~]

UPDATE: A commenter corrects our faulty reading skills: "The name of the proposed new operator is CDK Tavern rather than Oak Tavern. On Monday night, the SLA Committee of the local community board voted to recommend to CB3 and to the SLA that CDK Tavern's application for a liquor license be denied. Neither the CB nor the SLA are bound by this recommendation, meaning that they still may get their license."