Week in Reviews: Pamplona Gets a Deuce, Los Dados Doesn't

Share All sharing options for: Week in Reviews: Pamplona Gets a Deuce, Los Dados Doesn't

Platt is off this week, but we've got reviews a-plenty to get through. Shall we dive in? 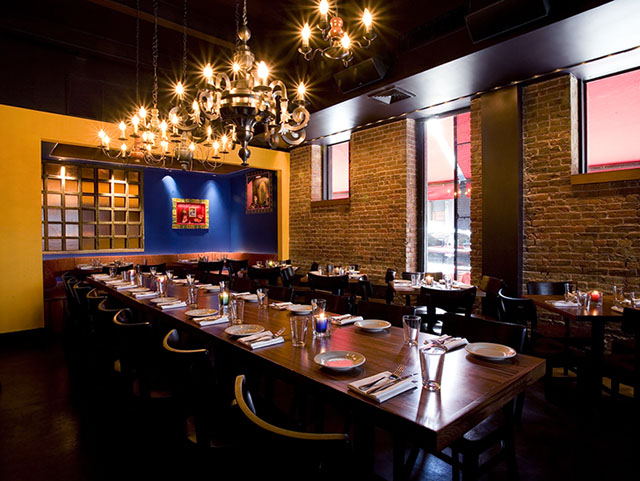 Pamplona is Ureña with an attitude adjustment, and I emphasize the word adjustment. Mr. Ureña hasn’t wholly reinvented the restaurant or himself. He’s still interpreting Spanish cuisine, and — lucky for us — still indulging his fanciful impulses.

He’s just diluting them somewhat and staggering them across a menu with a less inflated come-on and with the possibility of affordable, conventional eating for diners looking for that.

A deuce is a deuce, but it really does help matters to have the Bruni in your corner, which he is in the case of Alex Ureña. Also included in the review, these decidedly one-star-prose: "The food didn’t cry out for improvement and has in fact slipped a little, if the measure is the fraction of underperformers among the dishes...Pamplona is neither the best he can do nor a perfect fit for him. But it’s a way for him to stay in the game while staying sufficiently true to himself." [NYT]

2) Both Randall Lane and Paul Adams get with Los Dados this week (Lane, Adams) and the two reviewers concur that the restaurant has its moments, but ultimately isn't the stuff of Suenos, chef Sue Torres' two star gem on West 17th Street. Lane:

Torres, who made her mark at Chelsea’s impressive Sueños, classifies Los Dados as “Mexican home cooking” and focuses on the staples: enchiladas, tacos and ceviche. Little is memorable here, though she improves on some basics, such as the satsifyingly thick, unusually sweet tortilla chips, paired with cilantro-heavy guacamole. The shrimp-and-pork tamal scores with firm texture and a nearly caramelized ancho sauce, and a chili-powered pineapple salsa dominates a decent appetizer of rare tuna on crispy tortilla chips.

That's two-of-six-star language, if you're keeping track. To Adam for the summation: "Los Dados never missteps severely, but it's a disappointment after Sueños." [TONY; NYS]

3) Up third this week is the Restaurant Girl, Danyelle Freeman, who really settles in to have her way with Bobo. One star:

Unfortunately, the food stands in striking disharmony with the attractive ambience. The majority of the Pan-European fare neither looked nor tasted particularly appetizing, which is perplexing considering the chef's impressive pedigree.

After all, Cantrel diligently trained under Alain Ducasse for nine years and recently served as the executive sous chef at Country. Perhaps Cantrel had checked out of this "bed & breakfast" early, or was busy mingling with guests. Or even skipped the dinner party altogether.

But wait, there's more. "Unappealing plates were par for the course and even mediocre ones were too few and far between...If you're not the eating type - or particularly hungry - then Bobo's beguiling setting is a perfect way to spend the evening in someone else's home. [NYDN]

On the blogs, Andrea Strong can't bring herself to eat the duck hearts at Bun; Writing with My Mouth full is at Pamplona; Scoboco considers the question of whether the Five Guys burger is worth the wait; and NY Journal is at 26 Seats.