1) East Village: A tipster emails along the above photo with this note: "I wrote several months ago about a conversation I'd had with my landlord about a new restaurant in my building, right across 1st Ave from soon-to-be Momofuku Ko. The space was formerly a club that failed so they have to build a brand new kitchen in the bottom floor (the space is actually two legitimate floors). The awning went up two days ago and the place is called Zarza. I talked to the contractor today. He says it'll open December 15th. He also confirmed it would be tapas." [PLYWOOD]

2) Upper West Side: Look, the people want tapas, and the restaurateurs are going to keep giving it to them. From another tipster: "I was walking home from the gym last night and saw what looked like a new restaurant on 94th between Broadway and Amsterdam. The sign said Vins Tapas and although boxes were everywhere inside it looked pretty close to opening. It's right next to Jazz on the City, a local hostel, and across from what I think is a crack house. So good luck to the owners." [PLYWOOD]

3) MePa: Guest of a Guest reports that bottle service club Kiss and Fly will be opening in a few weeks in the old Aer Lounge digs. Color: "Meat Packing? Yes, we know what you’re thinking, it wouldn’t have been our first choice either. But we have faith in [bottle service host] Randy Scott. His track record has no blemishes, and he seems to strike gold everywhere he goes." [PLYWOOD] 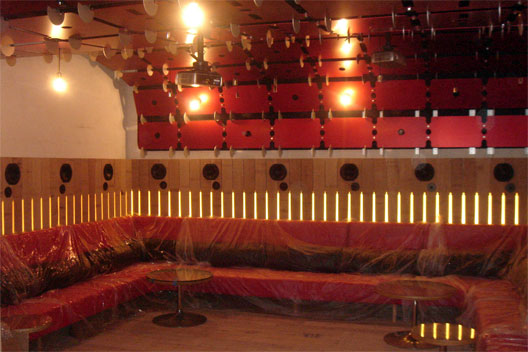 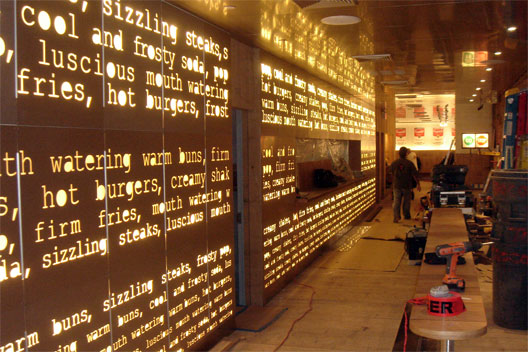 4) Midtown West: Above, two looks at the interior of the forthcoming Pop Burger—at top, the second floor lounge; at bottom, the first floor, which closely reflects the decor in Pop Burger's first outpost in the Meatpacking District. Here, at 14 West 58th Street to be exact, they’re slated to open the week of December 10, according to the PR folks. A bit more PR spin, for those so inclined: "The restaurant’s second floor, serving as a late night bar and causal lounge, will be a modern riff of an old New York saloon, with rough, raw white Oak floors and walls. Custom round, mirrored tables and bright-colored chairs will face red felt-upholstered banquettes lining the room to create intimate lounge and dining spaces. A classic American muscle car-inspired sound system will add to the raw, rock-n-roll ambience. On the third floor patrons will find the billiards room, with full bar and additional lounge seating, forming an ideal space for private parties."

5) Boerum Hill: Finally, the empty space at the corner of Bond and Pacific is morphing into a bistro/bar, according to Brownstoner intel Should be opening sometime in early 2008. [PLYWOOD]