Week in Reviews: No Deuce for Tailor

Share All sharing options for: Week in Reviews: No Deuce for Tailor

It's that time again folks. This week, with bonus new Week in Reviews format, we've got the Bruni at Tailor; plus Platt at Tailor and Fiamma, Paul Adams at Pamplona, Robert Sietsema at Hakata Tonton, and the RG at Allen & Delancey. And then we get into the elsewhere and all that jazz. Off we go. 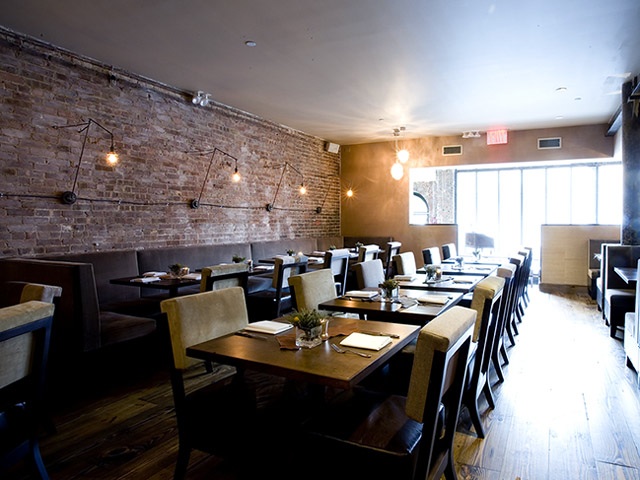 Frank Bruni one-stars Tailor this week. The review reads as such, though do note the extremely harsh zero-star-type dig he manages to slip in two-thirds of the way through. Things Bruni doesn't really have patience for include Mason's bloated ego:

Mr. Mason’s personal vision trumps your pleasure. His conviction matters more than your response. This, I suppose, is the very definition of artistic integrity. But it’s not the prescription for a great restaurant...The effect is at once precious and amusing, which can also describe the food...

Sometimes Mr. Mason’s sense of balance is dead-on, as it is with Arctic char that’s poached in tart passion fruit juice and butter and surrounded by earthy mushrooms.

And sometimes he’s not so steady. A duck-and-eel terrine in a chocolate consommé tastes like cat food splashed with Yoo-hoo.

Meow. But with that said, it does seem Bruni made every effort to give Mason the benefit of the doubt, if for no other reason than that he waited far longer than was necessary to file. Final word: "Mr. Mason may be too invested in his mind games..." [NYT]

Adam Platt two- and one-stars Fiamma and Tailor, in a way snubbing both by making them share real estate in his New York column. On Fiamma: "When Trabocchi’s complicated recipes are good, they’re very good. When they fail, they tend to fail in a fussy, overcomplicated way." On Tailor, which he clearly likes less than the Bruni: "...Tailor, when it works at all, works best as a high-toned bar." [NYM]

Paul Adams for the Sun comes back luke warm on Pamplona: "It's unfortunate that New York didn't go for the imaginative touches of the earlier restaurant; but it's good that Mr. Ureña is able to roll so smoothly with the punches. Pamplona is a pleasant simplification, not a drastic compromise." [NYS]

Robert Sietsema files from Hakata Tonton, the West Village pigs feet emporium: "Half of the menu consists of Japanese standards, with tonsoku substituted for the original ingredients. Thus, there are finger-shaped gyoza ($7), rendered excellent by the richness of the feet. "Are these wonton skins?" wondered Gretchen, prosecting one of the gyoza like a hand surgeon...Then there's the really nutsy stuff. How about a spaghetti carbonara ($12) made with pig feet instead of pancetta? [VV]

The RG has two stars for Allen & Delancey: "...Allen & Delancey boasts more than its share of meaty delights. Even if you're not an organ eater by nature, his wickedly light sweetbread raviolo may persuade you to explore a more carnivorous side. Allen & Delancey is an inviting hideaway, where guests can store up for winter on savory European classics and hibernate from the cold." [NYDN]

ELSEWHERE, Randall Lane for TONY four-of-sixes Allen & Delancey; the Times Dining Briefs have Bruni, Moskin and Burros at Toloache, Kingswood and 5 Ninth; Ryan Sutton logs the early reports on Mermaid Inn UWS and Smith's; and Tables for Two is at BLT Market.

ON THE BLOGS, Andrea Strong goes to Tailor and was 'impressed'; Lifestyle of a Yuppie treks down to the Wafles & Dinges Truck; The Gotham Gal is at Iriving Mill, for 'some good, some great' food; and Scoboco way up on the Upper West Side at Noche Mexicana.