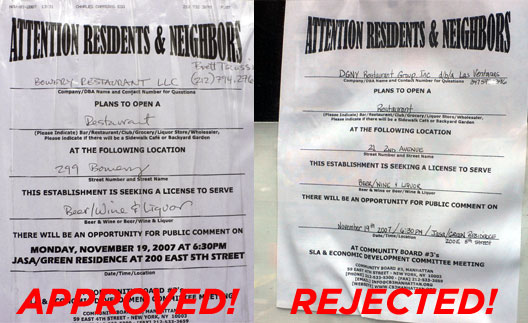 'Twas the best of times and the worst of times at last night's Community Board 2 meeting. Besides the protest against the absent rulers of the Cooper Square Hotel, the slate included liquor license hearings on two restaurants seeking to open next year in Avalon Bowery Place on 1st Street between Second and Third Avenues. How, you ask, did they fare?

1) APPROVED: First, the good news. Daniel Boulud's people were back at CB2 last night despite the fact that their restaurant planned for 299 Bowery—famously birthed as DBGB but no longer doing business as that discarded name—was approved for a liquor license months ago. Why run the gauntlet again? Director of Operations Brett Trussi tells Eater, "The plan that I submitted in July showed the bar in a different place. We ended up moving [the bar from the middle] to the front and I know the community board is sensitive to that." File under the proper care and feeding of your local community board: the committee voted to recommend approval to the State Liquor Authority, which has final say. 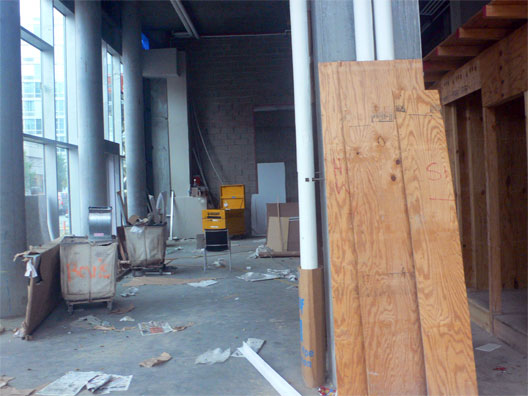 2) REJECTED: Just around the corner and down the block, in the second phase of Avalon Bowery, there's a nice big space on the northwest corner of Second Avenue and First Street (plywood, above) that also has restaurant dreams. But the restaurant—to be called Las Ventanas and to serve a 'Mexiterranean' blend of Mexican and Mediterranean cuisine—got negged by CB2. Seems the board is taking residents' complaints about too many bars in the neighborhood seriously, and here they invoked the 500 Yard Rule (there are already six bars within 500 yards of this spot). What makes this denial noteworthy is the résumés of the owners: the same folks who own and run Fleur de Sel in Tribeca and Son Cubano in the Meatpacking. "We think this can be a great addition to the neighborhood," co-owner Kevin Gouchet tells Eater. "We're going to proceed and see how far we can go." Brave words, sir.
· Drying of NYC: Protesters Decry Cooper Square Hotel Bars! [~E~]
· Boulud on Bowery: Daniel Gets His Liquor License [~E~]