A few bits of news now from the far off land we know, and love, as Red Hook. 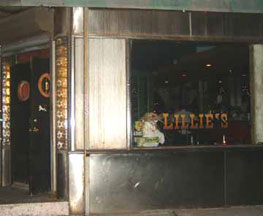 1) First, a person closely connected with the space formerly known as Lillie's writes with new details on the bar replacing it, owned by Brooklyn restaurateur Neil Ganic: "Lillie's will reopen (Soft) in about 3 to 4 weeks with a cool underground modern feel and a new name, Layla's. The whole place was gutted and the bar's history was hidden under years of decadence and abuse. The original 1930's bar and many of the timeless decor was saved and is standing proud among the new futuristic lounge style additions. Rumors are that this bar was a mafia hot spot 30 to 40 years ago. Capone was a regular back in the day and may have been owner at one point. The bar could be open to the public around the first of December. The bar will have several attractions nightly from an amateur comedy open mic night to Big Name Music artist and bands for exclusive engagements on Friday and Saturday. A few of the backers are in the music industry and own a big name guitar company (secret). I got a tip about there being a celebrity VIP night that is by invitation only before the opening. This will be a red carpet event with New York's celebs only in attendance." Recall as well that a branch of Ganic's La Bouillabaisse, in Brooklyn Heights, is coming as well. Bar/restaurant respective addresses: 46/44 Beard Street. [Eater Inbox]

2) More news on the shuttered Van Brunt Street watering hole Pioneer Bar, which we reported under new ownership in July. From an Eater operative: "It's in the process of changing hands to the new owners who want to reopen it for the spring, perhaps sans food but with the excellent back beer garden intact." So, casualties of the ownership transition include the excellent sausage of Pioneer Bar v1. [EaterWire]

3) Also on Van Brunt, what the hell is the deal with eatery 360? When last we left the joint, owner Arnaud had headed to "an exotic locale," leaving the restaurant shuttered, perhaps never to reopen. Three months later, the place is still sealed up tight. Intelligence on the future (or lack thereof) of 360 to the Eater tipline, if you'd be so kind.