Because this fall is all about wine bars, we thought it might be fun to check in on the progress at a handful of the expected newcomers. Special Eater photographic correspondent Will Femia hit the ground running; these are his findings, buttressed with tipster and staff intel. 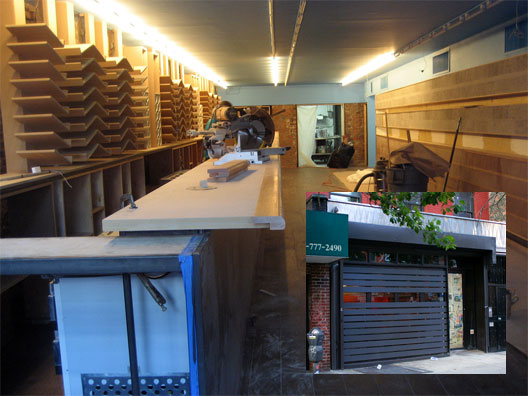 1) East Village: Well, well, WELL. What do we have here? It's the new wine bar Solex, at 103 First Avenue (at 7th Street). One might say that owners Frederick Twomey (Bar Veloce) and Christophe Chatron-Michaud (ex-Daniel) have learned a thing or two from the David Chang School of Interior Design. All well and good. There's going to be some nibbles available here too. [PLYWOOD] 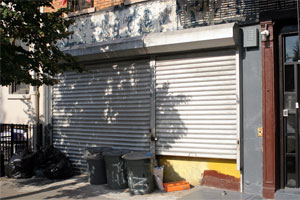 2) East Village: There wasn't much to see when we dropped by Terroir, the forthcoming wine bar at 413 East 12th Street (right) from the Hearth team that we broke news of earlier this year. Previous intelligence suggested a November opening, and we have no reason to doubt, or endorse, that possibility. Anyone on the inside care to let slip a little something? [PLYWOOD]

3) Upper West Side: Daniel Boulud's forthcoming Bar Boulud, opposite Lincoln Center at 1900 Broadway, is going to be quite something when it finally opens its doors. A recent missive to the Eater Inbox describes the space as "raw and unfinished," but that didn't stop the Chef from serving up a "hard-hat tasting" of charcuterie to selected friends last weekend (Eater, alas, not among them). Bets on opening date? [PLYWOOD]

4) Upper East Side: Across town on 64th, flying in under the radar, we've got this, per a tipster: "The space that was once Focaccia Fiorentina at 1166 1st Ave. (corner of 64th St.) will soon be a wine bar called Felice, according to signage on the plywood. There are also allusions to Tuscany on said signage." [PLYWOOD] 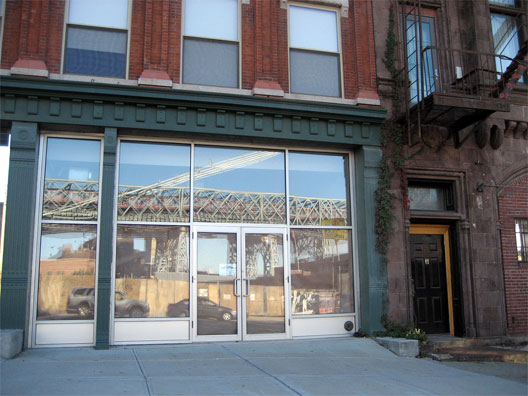 5) South Williamsburg: Finally, this insanity, courtesy of the North Fork's Bridge Vineyards, which will carry the full name Bridge Vineyards Urban Winery. The place, cleverly reflecting the Williamsburg Bridge at 457 Grand Street, will apparently will let customers blend their own bottles, per Raisfeld. Good times ahead. [PLYWOOD]