Share All sharing options for: Live from Red Hook: The Gatekeepers Team Baked

This is The Gatekeepers, Special Red Hook Edition, in which Eater operatives roam the city meeting the fine ladies and gentlemen that stand between you and some of your favorite impossible-to-get tables. 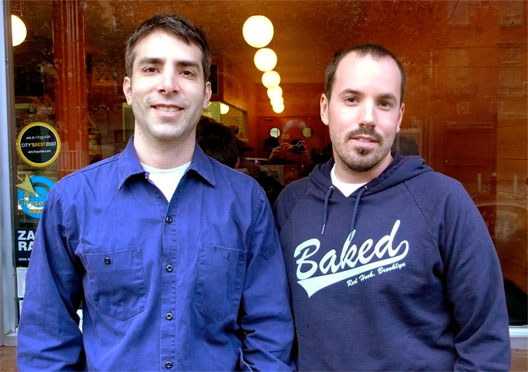 In The Hook, from morning coffee to afternoon cake, the go-to spot is Baked, a quirky, much-loved bakery/café at 359 Van Brunt Street. Insofar as they've been nice enough to let Team Curbed set up shop here for the day—serving us a complimentary plate of cookies while we rack up their bandwidth bills—we thought it might be nice to get to know the co-owners, Renato Poliafito and Matt Lewis, a little better.

Matt: The crowd here, Monday through Friday, is all locals. People who work down the street on the piers.
Renato: Locals, artists, craftsmen, curiosity seekers. You occasionally get one to two customers from Carroll Gardens, Dumbo, Park Slope. They're fair weather customers.
Matt: The weekend's completely different. The place gets mobbed. We call them tourists—people who come in, asking, 'Where's the street of shops?' And there are only like four stores here in Red Hook! But they're amazing stores! And of course we get people looking for Ikea: 'Is it open yet?'
Renato: We had a woman from Elle Italia in recently because she saw us in some guidebook.
Matt: Yup, Red Hook's in the guidebooks now.

Renato: These tables are relatively new. When we opened, we had little bistro tables, square tables, and on weekends it was crowds of people standing around. The maximum capacity was 10 people. So we built these booths. The best tables are the two with outlets, because during the week everyone has a laptop.
Renato: I like the seats facing out, looking out the window onto Van Brunt.
Renato: The music? Depends on who's shifted it. We have basic guidelines. No Anthrax. Not too heavy. But not too light. What's playing right now is probably my iPod. Yes, I'm a big Sufjan Stevens fan.
Matt: No Fergie. Fergie gets played in the kitchen. Unfortunately.
Renato: So what's next for us? Hmmm.
Matt: Well, about 50% of our business is wholesale, including two places in Manhattan. Cafe Grumpy in Chelsea, and sometimes CocaBar on the Lower East Side. And we're looking at a space on Atlantic Avenue, towards the Target. We might open something a little higher-end [than Baked]. But still not the cool part of Atlantic, because we don't go to the cool part of anything. Oh, and we're doing a book, next year.
Renato: Ikea? We honestly don't know. We'll see what happens at this point.
Matt: Traffic has gotten a lot worse since we got here.
Renato: But foot traffic has gotten a lot better. You take the benefits and bad things with everything. A lot of people can admit that we've been to Ikea and shopped at Ikea, that we all have something from Ikea in our apartments already. Out of all the big box stores, I'd rather have an Ikea than a Wal-Mart.
· Baked [bakednyc.com]