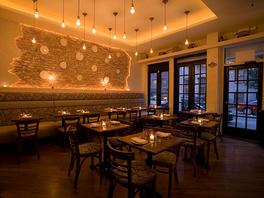 Restaurants that have occupied 199 Prince St. since 2000 include: Elysee, Sirocco, Frontière, Cantina, and Goblin Market (right); and, now, Shorty's.32. Here's to hoping that Josh Eden's New American restaurant, named for a nickname he picked up in the kitchen of Jo Jo, has the staying power that his predecessors didn't. Reasons it might succeed include the chef's twelve years working with in the Vongerichten empire or his extremely good reputation among chefs and food writers. The Food & Wine crew have given it an early stamp of approval (try the roast chicken) and the more informal buzz on the venue appears to be good as well. Eater has not paid a visit just yet, but we probably should think about getting around to it. Maybe, just maybe, Eden knows how to hit with two strikes—a cursed location, not to mention and brutal name.