Share All sharing options for: The Gatekeepers: Team Mermaid Inn

This is The Gatekeepers, Season Two, in which Eater contributing photographer Michael Harlan Turkell roams the city meeting the fine ladies and gentlemen that stand between you and some of your favorite impossible-to-get tables. 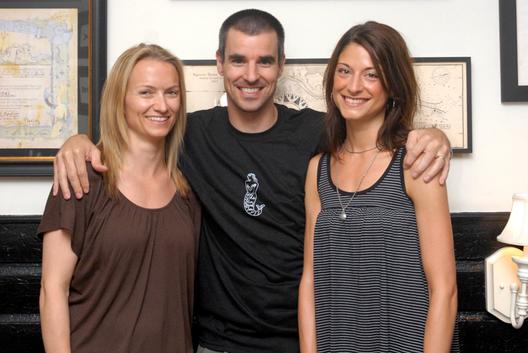 At the Mermaid Inn there is but one dessert, a chocolate pudding, and it is gratis. And if the fortuneteller fish curls up and rolls over, it means you're a passionate person. These things, and generally excellent, fresh seafood, are what regulars have come to expect from Danny Abrams' East Village seafood shack, which he opened, in 2003, while he and Jimmy Bradley were still partners. Coming up on its fifth birthday, Abrams is celebrating by opening an Upper West Side branch of the restaurant by the end of the fall season. At the original, waits can be daunting during primetime, even if you know gatekeepers Peter Crippen, Anna Ferrara, or Micheline Gaulin.

M: All rules are bendable, most particularly for regulars and the neighborhood.

P: We get people that ask for Danny (Abrams, owner of Mermaid), because they’ve read his name in the paper. He’ll call most of the time for his guests. Some try bribery. I get tips all the time, but $20 isn’t enough for me to lose my job. We have a customer, a 70 year old man, usually comes in at 530-6PM, and doesn't take no for an answer. He doesn't stay long, and is courteous to the staff. He's one of our "super regulars". The NY Theatre workshop is right around the corner. They come in with tables of 8 and we try to accommodate. The kiss-of-death is to point out “those table over there (are free)”. It’s like saying, “You don’t know how to do your job ? seat me, and I’m here now!” Oh, another pet peeve of mine is making reservations for 4, and then adding one when you arrive, or worse, already seated. We sometimes allow the “We’re going to be 5” but only have so much space.

P, A, & M: Notable celebrities, Zach Braff, Julia Stiles, Parker Posey. We don’t say or do anything special. They wait and we sit them when we can.

A: Have dinner at the bar. Barbara Bush comes in quite often (with security, who mainly order salads and/or soup). Barbara Bush is great. One time she was waiting ? waiting ? waiting, and I approached her and asked, “are you waiting for someone in your party?” and she said “no, but someone told me it would be 45 minutes”. We sat her right away.
· The Gatekeepers [~E~]