It's hard to convey the epic scope of this edition of The Shutter, our restaurant closings report, so let's just get right to it. Surgical gloves, please. 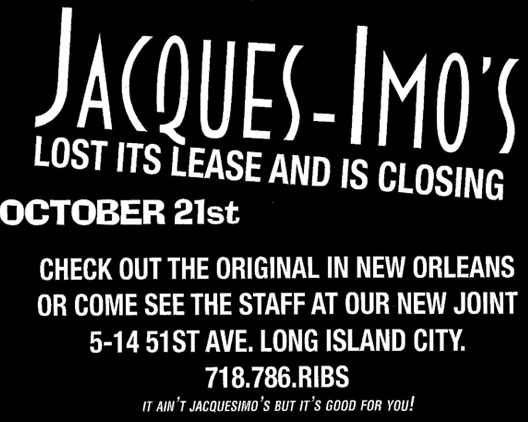 1) Upper West Side: New Orleans transplant Jacques-Imo's is playing the blues: "it's official," emails a tipster, "the attached (above) says 'lost lease' but this place has looked dead for some weeks." Something of some sort will live on in the Mecca that is Long Island City, however, so there's that. [Shutter Inbox]

2) East Village: Emails a reader, "What's the deal with Imagine Bar & Grill? Looks pretty dead to me from walking by, the garden's been totally cleaned out and the restaurant looks cleaned out too. I haven't seen any signs about it either. Seems like this must be a closure, as I would imagine it'd be pretty stupid to do renovations at the end of outdoor dining season when your business is basically centered around a garden space." Indeed, it seems just like yesterday that Imagine opened to no acclaim in the old Miracle Grill space, but yeah, it's arrivadoenski. [Shutter Inbox]

3) East Village: From a special Eater operative: "Cafe Fuego, halle berry's boyfriend's dead on arrival cuban place, is no more. they have closed for the next few days and will reopen as Fuego, World Tapas. Great idea." According to the official website, "The World Re-Ignites October 8!!!!" Be very afraid (and be on the lookout for homeless Internet-types.) [Shutter Inbox]

4) West Village: Sayeth a tipster: "Walking home yesterday on Grove Street I noticed that Once sushi strong hold Taka has closed its doors. The place use to be packed and had a good reputation. Then something happened? I'm not sure if the place changed hands, because the crowds were no longer. Give it a few years and there you go." [Shutter Inbox]

5) Central Village: DeMarco's pizzeria on West Houston street, scene of that bizarre, tragic shooting last spring, has closed its smallish takeout area, Deep Dish reports. Emails a tipster, "I confirmed by a call to DiFara's. Dom's daughter who was the owner at DeMarco's answered the phone and confirmed that the place is closed for good
now." [Deep Dish]

7) Carroll Gardens: Old-school (since 1968) Italian eatery Nino's is done. Lost City serves up the color: "The place has gone through about a million renovations in the past five years. At one point, it sported some ugly, screaming-red neon signs saying 'Italian Eatery.' After that, some fancy awnings made their debut and a hand-lettered sign said 'Under OLD Management.' The interior kept getting more polished and less interesting, though you could always count on the horrible old oil painting of a drunken codger cradling a bottle of wine." [Lost City]