The Shutter reports on restaurant and bar closings around town. We invite tales of destruction in your neighborhood to tips@eater.com. God bless. 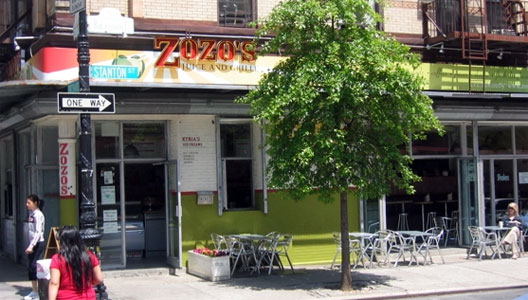 1) Lower East Side: We've watched this decline and fall with our own eyes, but an email from a tipster confirms, "Zozo's has officially shuttered!!! Noodle shop will be taking it over as of tomorrow." Friends, taste the excitement. We dare you. [Shutter Inbox]

2) Upper West Side: MUG's estimable Charlie Suisman passes along this earlier in the week: "Columbus Bakery closed today, I hear. May turn into a pizzeria." Survey says—phone that rings endlessly! Farewell! [Shutter Inbox]

3) Red Hook: So, that idea to open a concert venue in one of the more remote neighborhoods in New York, and bus people in from the F/G stop at Smith and 9th? Yeah, probably not the best idea. Brooklyn Vegan reports that The Hook will host its final show this Saturday—fittingly, a tribute to Coney Island. [Brooklyn Vegan]

4) Park Slope: From a special Eater correspondent: "I was walking my dog in Park Slope last night and noticed that Latin American restaurant Beso (Fifth Ave and Union) was shuttered. The interior was totally cleared except for a few bags of trash and a chair or two." [Shutter Inbox]

5) Columbia Street Waterfront: Gothamist is hearing word that Lido Bar is closing up shop some time in the next few weeks, perhaps as soon as next Friday. [Gothamist]